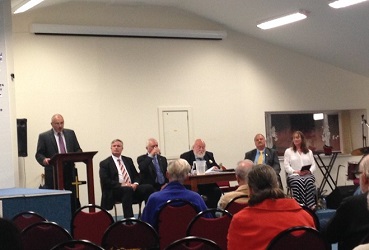 Around 80 people attended the Elim Family Centre in Onchan last night (Fri) for the second of three requisition meetings called for Garff ahead of the General Election.

In what was a good-humoured evening, chaired by Captain of the Parish Peter Kelly, members of the public were able to quiz the five candidates standing in the constituency on a range of topics.

These ranged from State pension payments and private member bills to healthcare delivery, consultations and how the Island will advance it's interests with the UK government.

The question of the name of the area was a recurring theme during the evening, as was the running of the election itself.

The last meeting for Garff takes place in Laxey on the 16th of September.