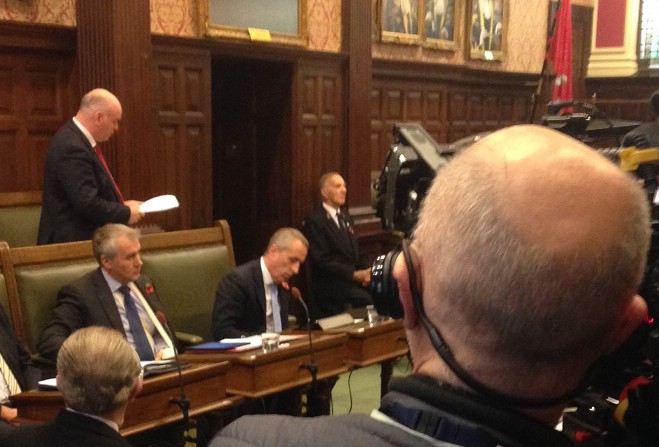 Members of the House of Keys have been urged to keep pushing the agenda for transparent tax policy in the Isle of Man.

Howard Quayle made a statement to colleagues this morning, following the release the Paradise Papers.

Pressure has been mounted on the Island over apparent VAT avoidance on private aircraft, and a Tynwald motion from 2005 supposedly aimed at changing the Island's laws to allow wealthy individuals to dodge EU tax regulations.

Mr Quayle distanced his current administration from the claims, and maintained any concrete evidence of wrongdoing had yet to be presented.

I briefed Honourable Members last month regarding coordinated enquiries the Isle of Man Government had received from media associated with the International Consortium of Investigative Journalists.

As I outlined, this media attention has centred on the importation of business jets into the EU through the Isle of Man, with a particular focus on the VAT treatment of aircraft leasing arrangements.

You will have watched with considerable interest the matters I discussed with you unfolding over the weekend and yesterday and I wanted to provide an update.

As outlined in the press release issued by the Cabinet Office on 24 October we have invited HM Treasury to conduct an assessment of the practice for the importation of business jets via the Isle of Man into the EU.

If there is any evidence of wrongdoing then all appropriate action will be taken against individuals or companies.

The scoping of the assessment by senior officers has begun and will be published this month, with the work being completed in 2018.

As I have confirmed, during the course of an internal review, we have found no evidence of wrongdoing, or reason to believe that our Customs and Excise Division has been involved in the mistaken refunding of VAT.

The VAT treatment of the importation of aircraft into the EU is a highly technical and complex area in which the Isle of Man follows the same policy, laws and rules as the United Kingdom.

However, we acted swiftly and decisively and have taken action to demonstrate that the Isle of Man is a well-regulated, open and transparent member of the international community.

As you will have seen from last night’s Panorama Programme, there have also been allegations made in respect of an Order laid before Tynwald in 2005.

Whilst enacted I should advise Hon Members this was never utilised.

It is difficult for any administration today to understand or attempt to justify the thinking made by an administration nearly 13 years ago.  It relates to arrangements for exchanging information for tax purposes in 2005 which have now been replaced by the OECD Common Reporting Standard.

We are considering all the allegations made to determine next steps and what action can be taken in relation to the past.

That being said Mr Deputy Speaker, as I have set out, where the Isle of Man’s integrity is challenged we will not be complacent.

I will continue to honour my commitment that where evidence of any wrongdoing is found the Isle of Man will take the appropriate action.

You will, I am sure, have also seen and followed the intense media and political focus on off-shore financial centres and tax and transparency standards, not only from the UK but further afield across France, Germany, Italy, Russia, Japan and the US.

Honourable Members this debate will continue in the days and months ahead.

Our overall message remains clear: The Isle of Man is not a place that welcomes those seeking to evade or aggressively avoid taxes.

We are proud of the role we have taken in moving the international tax agenda forward.

The Isle of Man has consistently been prepared to step out in front to support developing international tax transparency initiatives – we do not wait.

We did this with tax information exchange on request before 2009 and again in 2013 as an early adopter of the Common Reporting Standard, which was a significant step change in transparency.

We now provide full automatic exchange of tax information with EU Member States, the UK and the United States.

Again the Isle of Man has been a committed and active participant in the OECD’s Global Forum which is the body charged with monitoring the implementation of tax transparency standards. When previously reviewed by the OECD the Isle of Man received a top rating.

As Honourable Members are aware we are awaiting the outcome of our latest review by the OECD.

However it cannot - and should not be overlooked - that to truly combat evasion and abuse, action not only needs to be global but it also needs to be implemented consistently and effectively.

Without this the problem will be displaced rather than resolved.

We therefore welcome any encouragement by the international community including governments and all other relevant international bodies towards a global solution.

I hope that this provides an update but I will continue to keep Honourable Members updated as these matters develop.'