On Air Night Flight | Midnight - 5:00am
Shawn Colvin - Every Little Thing He Does Is Magic Download 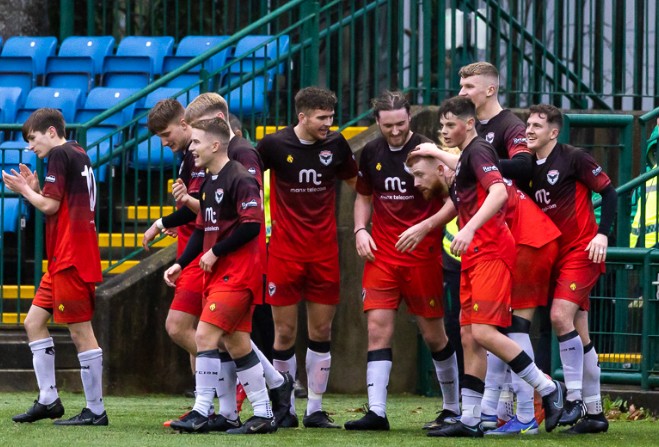 A second-half Dan Simpson strike and heroics from goalkeeper, James Rice, saw FC Isle of Man grind out a big 2-1 victory over Charnock Richard at The Bowl this afternoon (26 November).

Tom Creer put the Ravens in front on 15 minutes after capitalising on a poor back-pass in the Charnock Richard defence.

FC IoM substitute, Dan Simpson, then provided the decisive second goal for the home side in the 68th minute after finishing off a well-worked free-kick routine.

FC IoM Manager, Paul Jones, described his feelings on getting his first win in charge of his side:

On a wet and windy afternoon, both FC Isle of Man and Charnock Richard went into today's NWCFL Premier Division clash looking to recapture some better form after a string of recent disappointing results.

The visitors started the better with Charnock Richard top-scorer, Nathan Nickeas, striking the crossbar from close-range after three minutes.

The Lancashire side had the ball in the net just eight minutes after when Carl Grimshaw poked home Spencer Bibby's free kick from the right from six yards, only to see his effort chalked off for offside.

After soaking up some early pressure, it was FC Isle of Man who then took a 1-0 lead on 15 minutes.

Ravens' striker Tom Creer latched onto a poor back-pass from Charnock defender, Simon Grand, towards his goalkeeper, Connor Eastham, and Creer took control to chip over the onrushing Eastham into an empty net.

But Charnock Richard struck back on 31 minutes.

FC Isle of Man failed to fully clear a corner from the left, and a whipped ball from Bibby found Grimshaw at the far post who nodded low into the bottom corner to make it 1-1.

Level at the break, and both sides started the second half at a high pace, with the swirling wind proving an issue for the FC Isle of Man defence.

It took until the 68th minute for the next breakthrough which went the way of the hosts.

Midfielder, Dan Simpson, made his mark just moments after coming off the bench when a short free-kick from Ste Whitley 25 yards out put Simpson behind the Charnock defence who'd switched off.

Simpson then made no mistake smashing a low left-footed effort into Eastham's bottom left corner.

This seemed to be the catalyst for Charnock Richard who upped the intensity on the Ravens defence.

However, FC IoM goalkeeper, James Rice, was on hand to produce a string of sensational and vital saves during the last 20 minutes.

Most notably, a quick-fire double-save from a Charnock Richard corner in the 71st minute, a huge point-blank stop to deny Grimshaw with ten minutes left and a low diving save to deny a Will Riding free-kick.

The 2-1 win means FC Isle of Man at least temporarily climb up to 17th in the NWCFL Premier Divison standings.

The Ravens next match is away against Barnoldswick Town on Saturday, 3 December, kicking-off at 2pm.

Man of the Match: Charlie Higgins (FC Isle of Man)