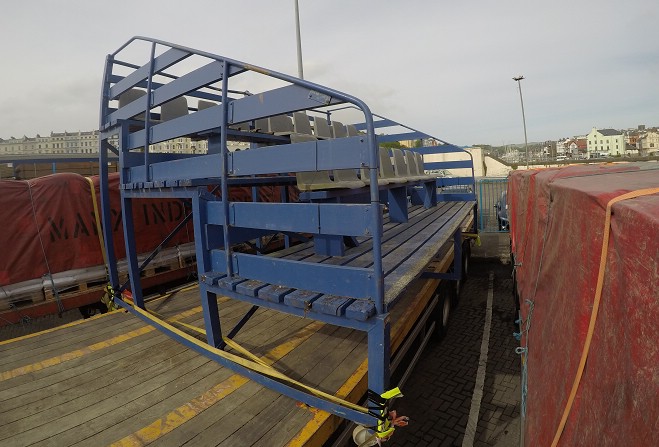 Road race fans in the south of the Island have a new option for viewing this year's Southern 100 - thanks to a Cumbrian rugby club and two Island businesses.

A 27-seater grandstand, no longer needed by Silloth rugby club was offered by chairman Alan Tiffen, a fan of racing at the Billown circuit, to event organisers.

Long-time sponsor of the International Southern 100 road races, the Steam Packet Company shipped the structure to the Island, for free.

The stand was collected from Silloth by Manx Independent Carriers, which then delivered it from the ferry to Castletown, the firm also waiving its fee for the service.

As well as providing extra spectator seating on the Billown circuit in July, it's hoped the mobile grandstand can be used at other community events.

Thanking SPC and MIC for their support, Southern 100 Treasurer Richard Haddock said: "We were thrilled when Alan offered us the spare grandstand, the races are hugely popular and we are always in need of additional seating, which is why we invested in our first mobile grandstand. The addition of a second facility will provide more comfortable and safe seating for spectators."