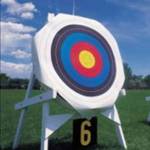 This week, in stark contrast to last, there were near perfect shooting conditions at Ronaldsway for the Club competition day yesterday.

In the senior recurves, both Colin Moore and Dave Berry set new personal records when they shot this round for the first time.

The scorecards at the end of the day showed Colin had beaten Dave by just four points, but following checking by the Records Officer, it emerged someone's maths were adrift and Colin actually finished twenty six points ahead of his rival.

In the senior compounds Adrian Bruce also set a new personal record, this being the first time he had submitted a score for the round.

Despite shooting a brilliant nine into the wrong target, he shot two 6-gold ends on the 80 yards distance and finished with a great score of 1151 which is only 23 points off Peter Mumford's club record.

Although Peter was nowhere near his record score this week, he also managed a 6-gold
end at 80 yards.

In the ladies compound Joy Gough started well at the longer distance but tailed off towards the end of the day finishing on a score of 1134 - again with two 6-gold ends on the middle distance.

Sarah Rigby however found the longer distance more challenging, but made up for this by putting in three 6-gold ends in succession in the 60 yards section of the shoot and will gain
her official G.N.A.S 6-gold end badge for this achievement.

Anne Rutland was another archer who shot a round for the first time setting up a new personal record for the Long National.

Her shooting partner on Sunday was Alan Munro who was shooting the same round using his longbow, finishing with a score of 103.

The only junior archer shooting on yesterday was Chris Holmes who shot a Junior National round.

He recorded a score of 395 on his first attempt which gave him a personal score to beat on this round in the future.

The total of eight 6-gold ends at the longer distances showed how brilliant the shooting conditions were yesterday and a few more days like that will certainly see the club records tumbling this season.