Merson to Speak at Ball 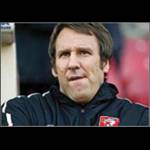 Former England and Arsenal footballer Paul Merson is the guest speaker at this evening's Craig Heartstrong Foundation Ball at the Hilton Hotel.

He made 21 international appearances and scored three goals.

With Arsenal, he won every top flight domestic trophy and was voted P.F.A. Young Player of the Year in 1989.

In 1994, Merson admitted to being an alcoholic and cocaine addict - the Football Association arranged for Merson to undergo a three-month rehabilitation programme and he returned to the side in February 1995.

He is now part of the Sky's popular Gillette Soccer Saturday show as a pundit.