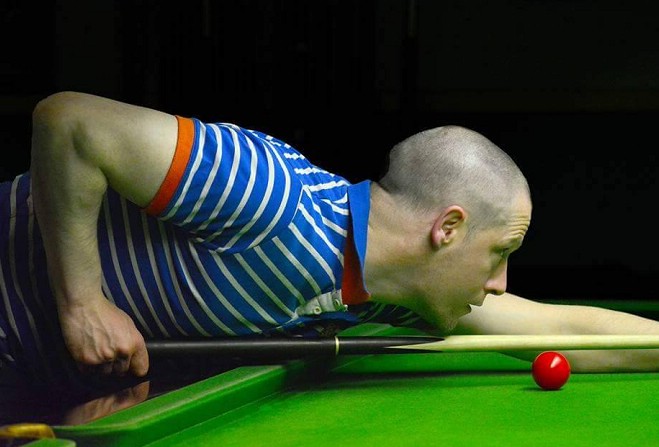 James Kerr tops the break league with a 57

Just eight individuals can now boast perfect records of three wins from three outings – and three of those hail from the west.

Mike Crook, John Kelly and Kyle Darby all won again, this time at home to Douglas Snooker Club ‘Newbys’, along with Don Humphries who had a break of 22.

It took a break of 33 from Zain Abideen to avoid the whitewash for the visitors, registering a comfortable win in his frame against Geoff Hall.

St Olave’s sit second, after they remained the only other unbeaten side with a 4-1 victory at home to Finch Hill ‘Musicians’.

James Kerr was the league’s individual performer of the week, scoring the highest break of the season so far with a 57 against Matthew Dodd.

Sean Corkish also had a 34, with teammates Paul Smyth and Benito Mongiovi the other winners for this season’s only team from the north of the Island.

Finch Hill ‘Mob’ gained ground on the leaders, though, with a 5-0 trouncing of the Douglas Snooker Club ‘Wannabes’ – they scored consistently well, with breaks of 24 and 20 for Tom Miller, 24 for Peter Crellin and 21 for Steve Oates.

Fourth in the standings are the Douglas Snooker Club ‘Hurricanes’, who won 3-2 at home to Port St Mary Legion.

Paul Smith and Chris Dagnall led the way for the hosts with breaks of 31 and 27, and there was a break of 22 for Mike Boyle – the other wins came from Nigel Kermode and Shaun Roberts.

Finally, both Malew sides secured their first match wins of the season.

Malew 1 had a successful trip to the Finch Hill ‘Young Guns’ with victories for Roy Gelling, Nick Crouchman and Tom Collister.

Dollin Mercer and Will Duquemin won for the home side, and Darryl Hill had a break of 20 but it wasn't enough to claw back the handicap difference against Crouchman whose solid potting left the ex-professional needing a snooker on the yellow.

A win for Malew 2 meant the Ballasalla outfits did the double against Finch Hill this week.

Matt Radley and John Spellman, who had a break of 23, scored valuable points for the ‘Rockets’, but Tony Pring, Alan Coventry and David Quayle sent the visiting ‘Rockets’ back north with their tails between their legs.