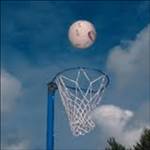 Route 1 v Ballasalla A, by Sadhbh O'Shea
Sitting pretty at the top of the Premier Division, Ballasalla A entered this match confidently, beating Route 1 Connections 42 – 21.
Route 1 got the game off to a great start with a goal straight from the first centre, but Balla hit back with two of their own. There was no looking back after that and Ballasalla began to dominate the latter stages with good tactical play. POTM; Sarah Madrell (Route 1) and Hannah Riley (Ballasalla A.)

Thompson A v PWC MG Rubies
Rubies were determined to move from the bottom spot this week, but Thompson denied them the opportunity, finally beating them 32 – 24.
Both teams took time to gain momentum with neither converting their chances at the net. Thompson dug deep to find that edge and through a series of strong passes, enabling their shooters to create advantage. POTM; Pip Cross (Thompson A) and Di Cregeen (PWC MG Rubies.)

Ballasalla B v C&S Joinery A
C&S Joinery A got off to a great start in their first match of the season with a 43 – 28 victory over Ballasalla B.
With an odd number of teams in the Premier Division C&S had to sit out in the opening week. They showed their fresh legs by getting off to a quick start and opening the scoring.
Ballasalla weren’t going to let them run away with the game as they mounted a comeback in the third quarter. However, it was too much to overcome and C&S took their first win to move them up the table. POTM; Andrea Debruin of C&S Joinery A.

Ramsey A v Vanilla Room
In a match that looked like it could go either way in the early stages Vanilla Room broke ahead to win 31 – 22 over Ramsey A.
It started off pretty evenly with both teams scoring early goals but it was Ramsey who dominated the first quarter. Vanilla Room fought back and mistakes began to creep in to the Ramsey A game. Vanilla maintained their quick play throughout the second half and saw some excellent feeds into the circle, to slowly nudge out a lead. Ramsey didn’t give up easily and some strong defence kept them in the game. Players of the match; Tilly Davies of Ramsey A and Bree Hutchinson of Vanilla Room.

C&S Joinery B v Manx Glass Saints
C&S B continued their winning streak to make it three in a row, beating Manx Glass Saints for the second time in eight days.
Despite the 31-7 score, this match was much closer than the previous week with Saints making C&S work for their victory. Play dominated the edge of the circle, both teams making their opposition work harder. C&S scored most goals in the second half taking advantage of a tiring Saints who fought to keep C&S out. POTM; Tessa Wagstaff (C&S Joinery B) and Kym Hicklin (Manx Glass Saints.)

Missfits v Pokerstars, by Judi Clark-Wilson
Wow. What an awesome attacking quartet for Misfits. Good, strong passing and movement from all Misfits players made this a hard task for Pokerstars. Emma Williams and Sandra Burrows make a welcome return this season and with Emma Snell and Rebekah Hughes bringing the ball up court fast and accurately they are going to prove strong contenders for winning the First Division. POTM: Emma Snell (Misfits) and Rebecca Cubbon (Pokerstars).

Anglo Manx Electrical Services v Team DQ
With both teams only fielding 7 players and a reshuffle since last week's cup matches, it was going to be an interesting match. Anglo-Manx pushed ahead leading 8-7 in the first quarter, due to Team DQ’s weakened defence and Anglo-Manx brought play to their own speed in the centre third. Anglo-Manx linked well to deliver the ball into the circle extending their half time score to 20-14. Team DQ fought back in the third quarter with strengthened coordination and defensive play intercepting many Anglo Manx feeds. This stagnated Anglo’s advances to gain an additional lead and narrowed the gap to 22-28. In the final quarter, Team DQ pulled back a couple of goals. Unfortunately this was not quite enough and despite DQ’s admirable renewed efforts, Anglo-Manx led 37-33 at the final whistle. POTM; Netty Mooney (Anglo Manx) and Karly Andrews (Team DQ).

Ramsey B v Fencibles B by Rebecca Harding
This could have been a strongly-fought game between the two young sides, but Ramsey were only able to field a team of five players. Fencibles took an early lead, though Ramsey fought hard and made some strong attacking moves. Unfortunately early in the second half the Ramsey centre was injured, meaning that the team were forced to conceded the game, giving Fencibles a 40-0 walk over.


Fixtures - Sunday October 17
NSC1: 9am C&S Joinery A v PWC MG Rubies; 10am Toomraiders v Ballasalla B; 11am Ballasalla A v Thompson A.

QEII: 9am Anglo Manx v Ramsey A; 10am Ramsey B v Nobody's Angels.