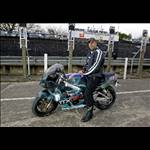 History has been made on the famous TT Mountain Circuit!

The world's first zero carbon emissions race, the TTXGP, has been run, with the pre-race favourite breaking the 50cc TT record.

Robert Barber from Team Agni completed the single lap event at an average speed of 87.435mph, in just under 26 minutes.

Thirteen machines made it to the startline, three of which retired during the race, including the only Manx-built bike, ridden by James McBride.