Rusty to fly the Manx flag at World Masters 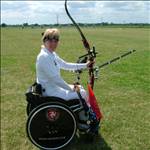 The Three Legs of Mann will be flying in Sydney later this year when the Australian city hosts the 2009 World Masters Games – the year’s largest multi-sport event based on participation.

Wearing the Manx colours, and taking the Manx flag with her for publicity purposes, will be wheelchair archer Rusty Kneale-Barrow from St John's.

Entry to the archery section of October's prestigious competition is purely by invitation with qualification based on achieving a top 16 position in either the World or European Championships.

The Masters is one of 39 events – around 37 of them against able bodied athletes - in which Rusty is entered this year.

Another is as a member of the Isle of Man team at the NatWest Island Games in Aland.

Since taking up the sport only three years ago Rusty has achieved a remarkable level of success.

Sponsorship from the Royal Bank of Scotland International enabled her to take part in last year’s Europeans where she was spotted by Great Britain talent scouts and invited to join the development squad with a view to preparing for the 2012 Paralympic Games in London.

The World Masters event in Sydney, which is an able bodied competition, will see around 700 competitors in the archery section alone which will provide an excellent build-up for Rusty to the World and Commonwealth Championships, not to mention the Paralympics in 2012.

She is likely to be one of only two wheelchair athletes from Britain at the World Masters and the only one in her own discipline – recurve.

Currently she is ranked number two in the Great Britain squad in her class and barring sudden loss of form or illness should be on her way to London.

Rusty adds, "I don’t think people realise just how intimidating the atmosphere can be at these big archery events.

"The World Masters will be the biggest event I have ever done and these competitions can be really daunting.

"You are sat there with a bow and arrow with thousands of people watching and the noise is something else."