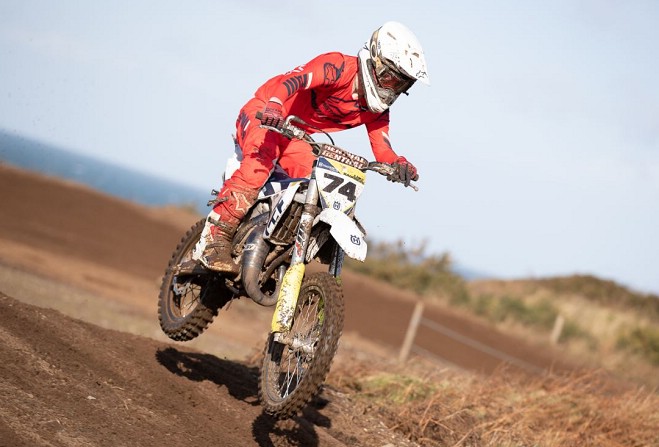 Sunday saw round one of the Isle of Man Schoolboy Motocross series fire into action at a cool, blustery, yet picturesque Ballagaraghyn in Jurby.

The eagerly-awaited start of the series didn’t disappoint, with some great racing and ferocious battles in every class.

Race one - Ryan Cringle, running with the number one plate, got the first hole shot of the year, closely followed by Max Ingham and Liam Crellin. Cringle was setting stunning pace and was riding very well: he held on to the lead until the halfway point when Ingham made his move on the back section of the course. Once Ingham took the lead he upped the pace in faultless performance to take the win.

Race two - Cringle is again was quickest out of the gate and took an early lead which extended further when Ingham made a rare mistake. However, a mistake mid-race by Cringle meant Ingham took the lead and never looked back, Cringle went down again later in the race and Crellin was there pick up the spoils and take second with Cringle in third.

Billy McKivett was welcomed back to the grid following injury, but the day belonged to Ryan Quirk in what was a perfect and dominant performance in which he led from start to finish in all three races.  Orry Millward rode consistently and looked comfortable throughout the day and took second overall. Percy Hampton tested his fitness and came in third.

The 85cc big wheel class welcomes rookies this year in what will be an interesting series.  Race one saw Liam Smith take the hole shot and set a thunderous pace at the front, as he was chased down by Luke Saunders and Beau Brown. Smith held off a late charge from Saunders to take the win. Race two saw Saunders on his new Husqvarna lay the hammer down to take an impressive victory from Smith and Brown.  In race three, Saunders now had a taste for victory and rode an impressive final race this time with Brown coming in second and Smith in third. Special mention goes to Josh Cottrell, Jack Meechan and Callum on his Yamaha whom are all serving the sand apprenticeships but were getting better in every race.

The 85cc small wheel class welcomes several rookies this year as a number move up from 65cc. In race one, Josh Blackley was hot out of the blocks, setting an impressive pace. An error by him meant that Harry Shand was able to wrestle his bike around the difficult course to record his first win of the season, though, with Callum Christian coming in second and Blackley remounting to finish in third. Race two saw Shand again gain the upper hand over his rivals to take the victory from Blackley, with the silky-smooth Max Hitchin coming in third. The final race was a war of attrition as riders began to tire: Blackley held on for victory, with Shand in second and pocket rocket Christian in third. The day also saw impressive and consistent rides from the ‘Nature Boy’ Alfie Matheson-Nelson, Sean Crone and Lucas Venables.

Conditions were difficult with a strong cross wind on the auto track. Stan Dentith started the season as he finished last year, taking the top spot in all three motos. Jayden Dentith took second overall in a closely-fought battle with Reiley Faragher as the two rookies in the sport set to battle. Leo Gray was fourth overall after a mechanical issue left him unable to race in the second and third motos. Well done to newcomer Connor Mciver who made a gallant effort on the bike.