Still tight as can be at top of Premier League 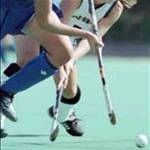 The top three sides in the Wi-Manx Mixed Hockey Premier League remain level on points, after they each made it three wins out of three!

Alex Cain scored a debut goal for Vikings, who stayed at the summit with a 5-3 success against Celts. The other scorers for Vikings were Neil Crowe, Julian Colley, Andy Harding and Kim Carney, and Ste Ronan, Christian Steriopulos and Sven Lindeque replied for their opponents. Under-18 player Hannah Leece had a good game for Celts.

Valkyrs A beat Vikings B 6-0 to keep up the pressure at the top, with their better 'goals for to goals against' ratio on the day, putting them a single goal in the 'difference' column behind Vikings. Gareth Morris and Greg Miller got two each for Valkyrs, and Ollie Webster and Andrea Kneen scored one a piece.

Reigning champions Bacchas A are the third team on six points at the top, a further three points behind on goal difference! Their scorers in a 7-0 victory against Ramsey A were Jonny Callow (2), Alex Atkinson, Richard le Page, Sharon Pope, Jamie Brown and Cat Cox.

The remaining game in the Mixed Premier League saw Bacchas B move off the bottom as they registered their first two points of the season, with a 3-1 success against Valkyrs B. Scorers for Bacchas were Tony Bentley-Roberts (2) and David Kneale, with Sarah McChesney on target for Valkyrs. Craig Leece missed two sitters for Bacchas, which would have increased their victory margin.

It's even tighter at the top of Wi-Manx Mixed Division One, after the meeting between the leaders and second placed side ended with honours even. Graeme Brown and Candice Cairns scored for Cammags, and Steve Cottier got both goals for Saracens Sabres in a 2-2 draw. The two team remain dead level at the top - even their 'goal difference' columns are the same - but Saracens stay just ahead, having scored two more.

Vikings C moved to a point behind the top two sides, thanks to a resounding 7-0 win over Bacchas C, and Ramsey Ravens beat Harlequins A 3-0 to climb above Bacchas C into fourth place, on goal difference, after three games.

A goal from Steve Babb saw Castletown Cushags pick up their first points of the season with a 1-0 win over Valkyrs C, and move off the bottom of the table.

The top three sides at the top of Mixzed Division Two all had comfortable wins, as did Castletown and Cronkbourne Bacchas, the top teams in the Mixed Under-16 League.