Tight at the top with two to play 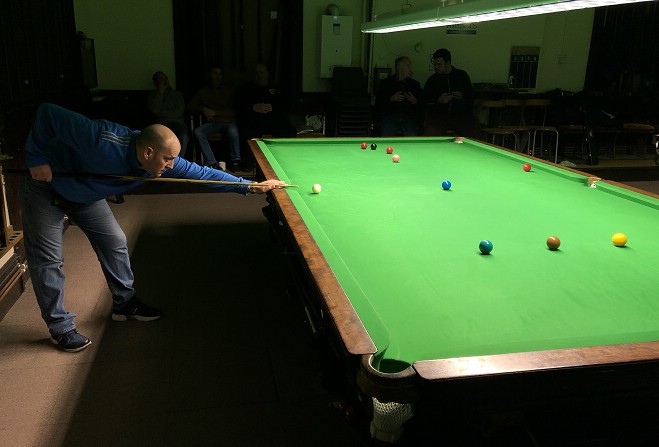 'Mob' hang on despite loss to Peel

Finch Hill 'Mob' are hanging onto top spot of the 2018/19 Macs Builders Merchants snooker league with two matches left to play, despite losing this week.

Steve Finnegan had a break of 43, and Tom Miller hit runs of 31, 22 and 20 as the duo kept up their impressive individual records, but the visiting Peel Legion would win the other three frames to take the match win - Mike Crook, Don Humphries and John Kelly victorious for them.

St Olaves gained some ground on the leaders with a 3-2 win at home against Finch Hill 'Young Guns', although the guests did go 2-0 ahead through Darryl Hill and Calum Gardner, with Hill scoring breaks of 24 and 23.

Sean Corkish had breaks of 28 and 22 in frame three, and Benito Mongiovi drew the scores level before James Kerr completed the comeback with a break of 36.

Finch Hill 'Musicians' couldn't capitalise on the close scores above them, as they were defeated 3-2 by Douglas Snooker Club 'Newbys' - Ste MacDonald, Jimmy McDaid and Zain Abideen the winners for the visitors.

Vinny Dale and John Kennish won for the 'Musicians', with Kennish hitting breaks of 47 and 22.

Douglas Snooker Club 'Hurricanes' may well feel they're now out of the title race after a 4-1 defeat at home to Finch Hill 'Rockets'.

Paul Smith had the only break of note, with a 21, and the only home win - Marek Kenny, Graham Ashton, John Spellman and Matt Radley all won for the 'Rockets'.

There was a local derby in Ballasalla, which saw Malew 1 come out 4-1 winners against Malew 2.

Back at Douglas Snooker Club, the 'Wannabes' were beaten 3-2 by Port St Mary Legion.

The lead changed hands twice - Shaun Roberts put PSM ahead, but the 'Wannabes' then led after wins for Steve Cowin and Fred Corris, before the southerners took control once more through Marc Morley and Terry Boyle.