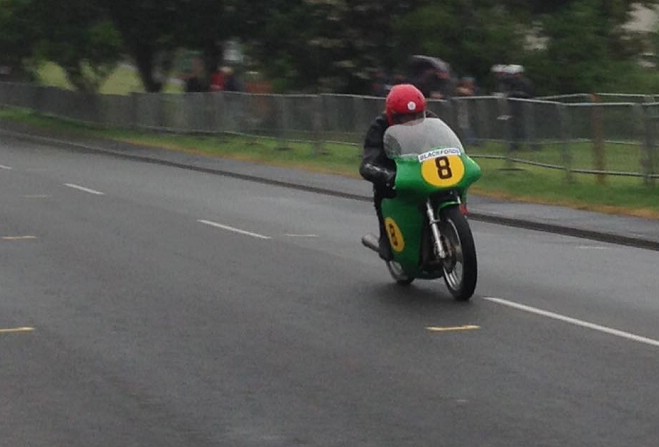 The first session of the Blackford's pre-TT Classic has got underway despite poor conditions.

Ian Robertson proved triumphant in the day's first race on the Billown circuit.

He won the Support Race in the Blackford's pre-TT Classic by 59.7 seconds ahead of second-placed Jeff Ward.

Mike Hose then made history in the Lightweight contest.

Despite being pushed all the way, Hose claimed victory ahead of second placed Brian Mateer to record his fifteenth title at the meeting.

Jeff Ward made his second top-three finish of the day in third.

The reduced six-lap Senior Classic was next up in the morning session at Billown.

Barry Davidson and Bill Swallow battled hard to finish second and third respectively - but the winner was Honda rider Steve Ferguson who led from the outset.

Jamie Cowton was the next rider to celebrate victory in the Geoff Duke Junior Superbike Post Classic.

Runner-up for the second time this morning was Barry Davidson whilst Gary Vines rode well to finish inside the top three.

The Sidecar race had added incentive due to the increased prize pot.

That was due to the two races being combined following an oil spill on the course on Friday night forcing changes to Saturday's race programme.

It went right down to the wire but Vince Biggs and Vicky Cooke were the ones celebrating at the finish.

They were just up on Rod Bellas and Danny Quirk and third-placed Mike Bellarby and Dave Gristwood.