After the deluge, the big clean-up 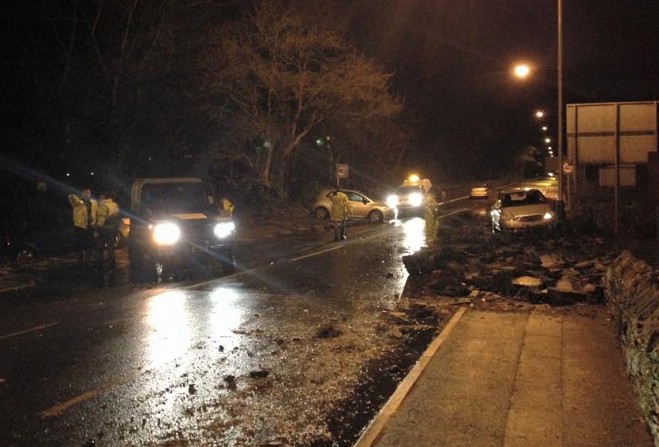 An Island-wide mopping-up operation is ongoing, after hours of torrential rain brought havoc to the Island's roads yesterday.

The Fire and Rescue service, Civil Defence and Infrastructure roads teams were fully stretched from mid-afternoon, dealing with calls to flooded roads, homes and businesses.

In Laxey a bridge in the lower part of the village collapsed and a bus toppled into the river below.

Around the Island, sandbags were distributed, cellars pumped, and burst manhole covers replaced - as the Island took its first severe winter weather lashing.

Around 25 DoI teams worked late into the night, closing flooded roads and helping clear others.

The Mountain Road was closed after a landslip, with north-south traffic sent along the coast road, itself flooded in parts.

Main arterial routes to the south and west were passable only with extreme care, with water up to a foot deep reported on Peel Road.

Elsewhere, there was serious flooding in Colby, Foxdale, St Mark's, Glen Vine, Port Erin, Ramsey, Crosby, Union Mills and between Ballig and Kirk Michael. In some cases deep standing water covered the carriageways, in others, torrents ran down the street

Waters rose in the sports halls at the NSC as the river outside burst its banks, there was flooding in Arbory school hall, cars were abandoned and late last night, structural damage left some residents preparing to evacuate their homes.

The NSC remains closed, as staff continue to try and clear up the damage.

The heavy rainfall on top of already saturated ground meant the floods were slow to subside - a situation made worse with drainage systems already overpowered.

Despite urgent police advice to the Manx public not to travel unless absolutely necessary, and for commuters to wait until the rain passed, many roads were grid locked at rush hour.

Whether the Island's infrastructure is sufficient to deal with such heavy, prolonged rainfall, and whether the authorities are well enough prepared to cope with its impact, are questions that will now be asked.