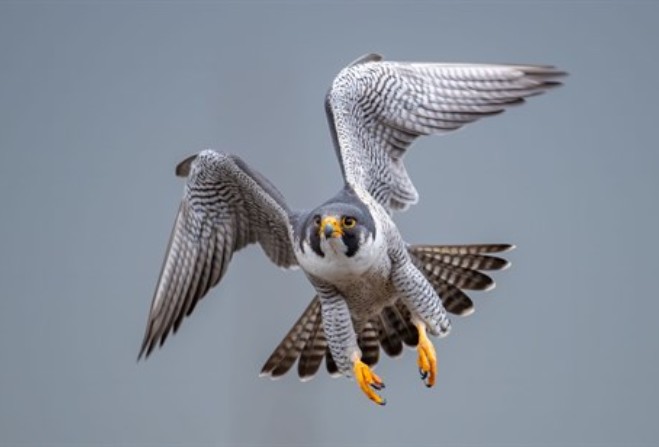 The falcon was found in Peel

A bird of prey found in Peel last week died from avian influenza, tests have confirmed.

The peregrine falcon is the seventh bird confirmed to have died from the highly contagious H5N1 strain on the Island since July.

In that time, nearly 200 dead seabirds have been collected by the Department of Environment, Food and Agriculture (DEFA) on Manx beaches.

It has not been possible to test all the birds, but it is strongly believed that the H5N1 strain confirmed in recent outbreaks in seabird colonies in Scotland, is to blame for the deaths.

As the virus is not affecting kept or farmed birds, no restriction zones or other measures have been introduced and the risk to people is considered very low.

However some measures have been introduced on the Calf of Man, after a dead guillemot with the virus was found on the islet.

Speaking to Manx Radio, Manx National Heritage's properties manager for land use and sustainability, Shaun Murphy, said it's still too soon to tell what the eventual impact will be on the Island's bird population as a whole.

"This is the first bird of prey testing positive for avian influenza on the Isle of Man and confirms that the virus is not just in the seabird population.

"Although we have no known cases in the Island’s kept birds, the risk to our wild colonies remains.

"I urge people to take reasonable precautions to help reduce the spread – by not touching or moving any sick or dead birds and keeping their distance from nesting or roosting sites." - Clare Barber MHK, Minister for Environment, Food and Agriculture

In the face of the ongoing avian flu outbreak across the British Isles, DEFA has issued the following advice:

Anyone who finds a group of dead birds together should contact Animal Health on 685844 or email agriculture@gov.im.