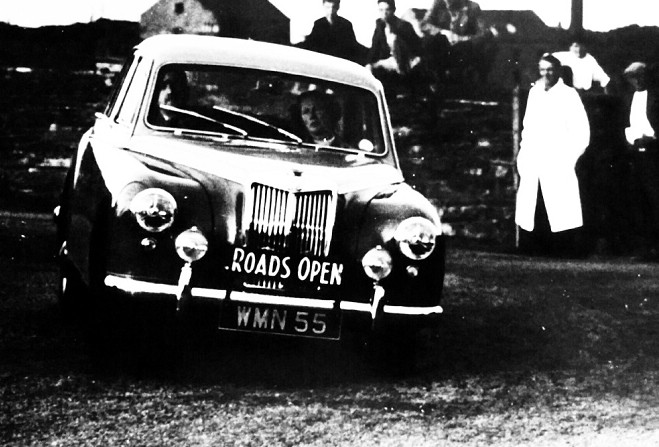 Image caption:  Brian & Doreen Mylchreest round Castletown Corner at the conclusion of the first Southern 100 Road Races in 1955 In the Roads Open Car (Southern 100 Archive)

Today is the 100th birthday of a woman who used to officially close and open the roads on the Billown Course for the Southern 100 races.

Doreen Mylchreest was born on 5 October 1920, and used to drive around the circuit with her late husband Brian in an MG Magnette.

She's been wished a happy birthday by Southern 100 Racing, which says the Mylchreest name has been associated with the races since they were first run in July 1955.

Brian and Doreen (as co-driver) continued to perform the closing and opening until 1963, when course inspections were added.

Their son David Mylchreest officially became a driver in 1999, with his son James continuing the family tradition in 2015.

Southern 100 Chairman, George Peach said: ‘On behalf of all involved with the Southern 100, I would like to wish Mrs Doreen Mylchreest many congratulations on her 100th birthday and hope she has a very enjoyable day with her family and friends.'

‘I would also like to thank her and her late husband Brian for their initial support in 1955 and loyalty to the Southern 100 since, which is continued today with son David and grandson James at the wheel of a Mylchreest Group supplied Course Cars. We are incredibly grateful indeed.'