Concerns in Colby estate over erection of telegraph poles 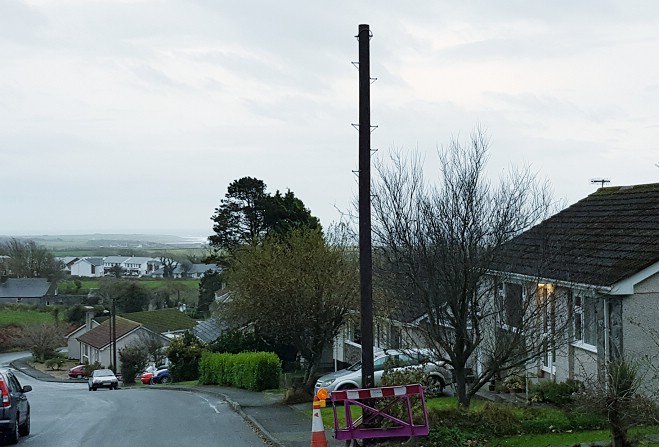 The sudden erection of a number of nine-metre high telegraph poles around Ballacriy Park in Colby has caused outcry among residents, who say they weren't warned.

It's understood Manx Telecom is installing them in the estate as part of the rollout of fibre broadband, which was accelerated by government this year.

The company says residents were told in October that new poles may be required to deliver the super-fast internet.

Arbory, Castletown and Malew MHK Jason Moorhouse says it's not too late to call a halt to the installation:

Manx Telecom has apologised for any concerns raised, and says while underground ducting is preferred for delivering fibre, it's not available in some areas.

A public meeting has been organised next Thursday from 7:30pm at Arbory Parish Hall for residents of Ballacriy, where both MT and the Department for Enterprise will be on hand to answer questions.

The telecoms company says an agreement was reached with government in the National Broadband Plan that using poles is a 'quicker and less disruptive method'.

According to Manx Telecom, existing poles are usually used, but in certain locations, such as Ballacriy Park, new ones are needed.

It's permitted to erect poles where required, and says more will be used as it aims to provide fibre broadband to more than 99% of premises by the end of 2024.

Residents do have right to object to the placement of polls within three months after they're installed.

You can do so by by writing to Manx Telecom directly.