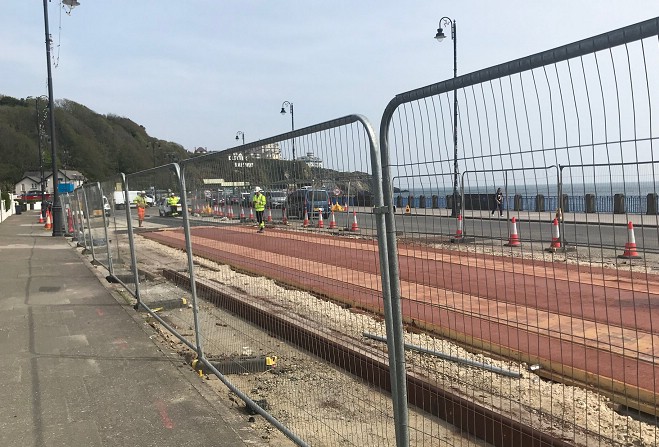 Multi-million revamp expected to be finished in September

Developments around the Island are being pushed back due to the ongoing promenade works, according to a commissioner.

The £26m revamp began in September 2018 and was initially expected to take two years to complete.

However, a number of setbacks mean the scheme now won't finish until September this year at the earliest.

Onchan commissioner David Quirk believes other projects are being neglected as a result.

"[Infrastructure Minister Tim Baker] is indicating that he's putting more resources for the promenade from his own staff, so what happens to the issues we want in Onchan, Douglas, Peel, right round the Isle of Man?

"They're going to be put back at least six months", Mr Quirk said.

Speaking earlier this month, Mr Baker said of the latest delay: "Although I am extremely disappointed at this setback, the department will continue to do all it can to assist [contractor] Auldyn in this final push for the end.

"There have been a number of unforeseen challenges, which must be acknowledged, including a difficulty relating to Covid restrictions in accessing labour resources from off-Island.

"A pragmatic and constructive dialogue continues with the company on finishing as soon as possible but we will not allow the quality of the finished product to be compromised at this stage."

But Mr Quirk doesn't feel the promenade regeneration work will be finished this year though, meaning a knock-on effect for other development projects.

He continued: "The aspirations that we have to do things are definitely going to be pushed back because the resources aren't there.

"All the material is going to the promenade. Instead of somebody standing above the parapet and saying 'look, we may have got it wrong. The promenade's not going to be done until 2022'.

"People would've accepted that a lot better and got on with it."