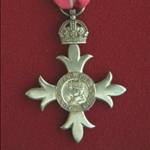 A top sportsman, the Island's most senior policeman, a remarkable soldier and the person who helps the relatives of motorbike racers get through the trauma of loss.

Four people in the Isle of Man who the Queen today recognises in her New Year Honours.

Retiring Chief Constable Mike Langdon becomes an OBE. After an outstanding career in the Lancashire force, he became Deputy Chief Constable of the Island in 2005 and then took the top job, five years ago.

Crime levels have fallen by over 30% during that time and it's seen as a reflection of his policy of neighbourhood policing, which involves getting officers back into the heart of the community.

He recently explained his role on Manx Radio's Talking Heads.

Wyn has been closely involved in the Auto Cycle Union and the Manx Motorcycle Club since 1980.

On a voluntary basis, she helps injured riders and their families and deals with the difficult aftermath in the cases of race deaths.

She says the role can often be tough for her mentally:

Hector Duff, the holder of the Military Medal, gets the British Empire Medal.

Mr Duff, still very active at 93 years of age, served in the 7th Armoured Division in North Africa under General Montgomery and then in Italy, in France and through until the final victory in Germany.

He spends much of his time going out to schools and gatherings, describing his experiences.

His award is for service to the Manx veterans community and education.

He describes the citation that came with his military medal, after he went out under heavy enemy fire, to help his comrades. It's those comrades, he says, who he remembers when he wears the medal.

Finally a name that will be very familiar to all in the Island, that of Olympic cyclist Peter Kennaugh. He becomes an MBE.

After a high profile season in the Sky team, Peter was part of the foursome that swept to gold in the Olympic Velodrome.
Since then he has always been happy to make himself available at functions and occasions around the Island.

A big future in the sport is forecast for the 23 year old.