'Great step forward' as retailers get set to re-open 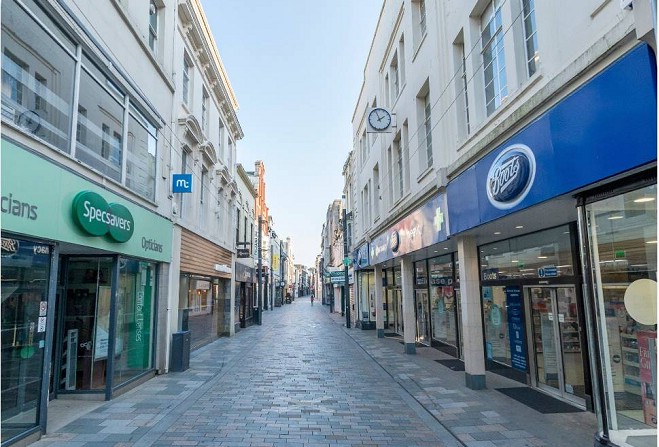 Retailers are aiming to make the health of customers and staff a priority, as many of the Island's shops prepare to open this week.

It comes eight weeks after some stores were forced to close their doors as restrictions were brought in to stem the spread of Covid-19.

'As long as we do it safely and put our customers' and employees' health and safety first, then I think we can certainly get the economy going again.'

Similar to the guidelines adopted at essential shops such as supermarkets, many stores will have to observe social distancing.

For Claire Christian Couture, this will involve measures such as an outside queue, an in-store one-way system and a 'sneeze screen' at the counter.

Hand sanitizer will be supplied by gin local distillery Fynoderee and signs will be in place advising people of the two-metre rule.

Staff have also been offered PPE such as face masks, visors and gloves, all of which has come at a personal cost to Ms Christian's business.

'I know that some small retailers are concerned about money and are conscious of that cost and if they're struggling to pay for this the Manx Solidarity Fund has stepped up again and offering support to those in real need.'

Ms Christian says government advice has been 'very informative', there is however, no specific advice on how many customers can enter shop premises based on square footage.

'I've basically calculated comfortably, how could several people be in the store keeping a two metre distance. We're actually going to allow three people in the store at a time.

'We think that's a comfortable scenario for staff and also the customers.'

It is understood guidance has also come from Marks and Spencer, the second-most profitable food hall in the British Isles.

Forty retailers in the capital attended a conference call with Douglas Town Centre Management, representatives from the Department for Enterprise and the M&S store manager, ahead of government's announcement last week.

At that meeting was manager of discount retailer The Works, Russell McNay.

He believes the coming weeks of trading with new guidelines will be 'a learning curve', and so retailers will need to have 'an open mind' when it comes to feedback from staff and customers.

For some shops though, re-opening may not be an option as they may unable to meet social distancing requirements.

Mr McNay says his store will not open until he can ensure service is fully in line with new guidelines.

'We need to be as accommodating as we can and more importantly, are they [staff] willing, are they happy and do they feel safe to come back to work?'.

According to government figures there are around 4,000 people who work in retail, 2,000 of which come from within the 'non-essential' sector.

The Department for Enterprise, which has been responsible for issuing support grants to 3,200 businesses, is advising shoppers to limit trips to 15 minutes.

This, it says, will avoid 'prolonged contact with others.'

While in each store, customers are also asked to only shop for essentials and to touch items they intend to buy.

And with many shops expected to adopt queue systems, the department is calling for those on the high street to be patient.