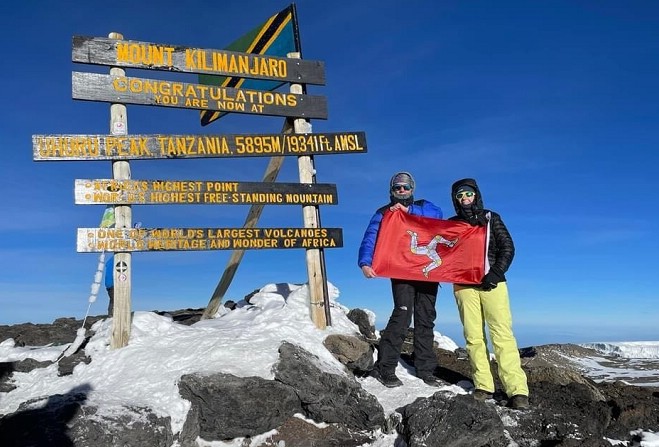 Two Manx women have climbed Africa's highest mountain, all in aid of charity.

Mount Kilimanjaro stands at a dizzying 19,341 feet above sea level.

At the top is the Uhuru peak - the target of 44-year-old Sharon Stevenson, who's spent her festive break taking on the challenge all in aid of Victim Support Isle of Man.

With her feet now back on Manx soil, Sharon spoke with Manx Radio about her experience:

Amber Oakley is from Victim Support Isle of Man:

Organiser of the Kilimanjaro challenge, Steph Gomaa, who raised funds for the charity Marie Curie during the trip, told Manx Radio that she had set it up, in memory of friends and family she'd lost to cancer.

The a 39-year-old from Onchan, who now works in the Middle East, said it took three months to put the adventure together.

"It's been on my bucket list for years. In 2018, I started a little music school in Malawi with Manx donations and we sent loads of instruments from the Island... [while] I was there I started to think about Kilimanjaro as the next challenge," she said.

The teacher, who taught music and drama for seven years at Ballakermeen High School, which she also attended, said her climbing pal Stevenson had asked to join forces after seeing photos she'd uploaded to Facebook, of her training for the trip.

"I would definitely recommend others to get out there and follow their dreams," she said. "My mum died so young so I've always wanted to do things for her as well."

Gomaa also paid tribute to Headteacher Adrienne Burnett of Ballakermeen High School, for encouraging her and others to "get out into the world."

Combined, the women raised nearly £5000 for their nominated charities.