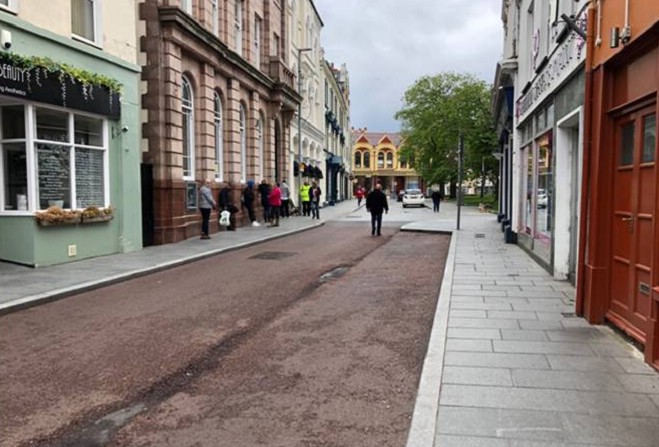 Town centres around the Island are being instructed to go traffic-free as government looks to ensure safe and socially-distant shopping.

The Department for Enterprise is advising commissioners to pedestrianise their high streets, as part of an 'evolving response' to coronavirus.

As a result, Parliament Street in Ramsey is now closed to vehicles throughout the day.

Clerk of the town's commissioners Peter Whiteway says the decision is about making the area 'feel safe to people' so they feel 'in control of their own personal space.'

In Peel, road closure boards are now in place on Michael Street, an area which the commissioners say is 'tried and tested' for such measures.

However the town's clerk Derek Sewell believes the move will prove to be 'unpopular with existing businesses.'

Joan Scanes, whose newsagents enjoys the passing trade of those in their cars, says the closure will have a 'detrimental effect', believing it raises a bigger question over a lack of parking around town.

For Port Erin, parking has been suspended on the shop side of Station and Church Road to allow space for those queuing.

The disabled bays, however, will stay open.

Meanwhile, Strand Street in Douglas and both Arbory and  Malew Street in Castletown remain unaffected, as they're already closed to vehicles during hours of trade.

It comes as non-essential retailers were allowed to re-open this week after eight weeks of being forced to shut their doors.

‘Exiting lockdown gradually and safely won’t be without its challenges' he said.

'But these past months have shown not only people’s resilience, but also their patience and understanding.'

You can hear Peter Whiteway's interview with Local Democracy Reporter Aaron Ibanez below: