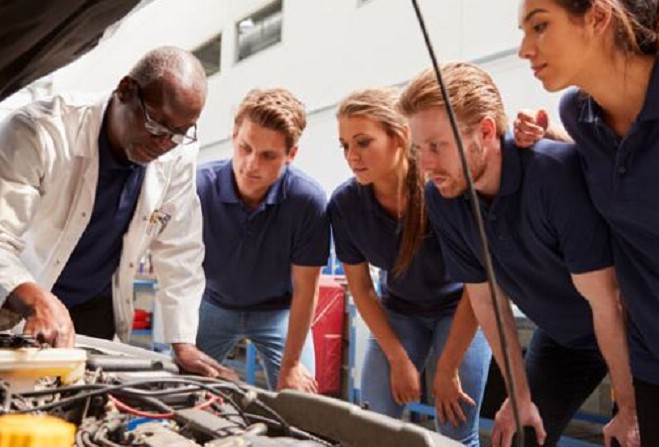 A chance to gain new skills

Over the last few days, local businesses and companies across the Island and UK have been celebrating National Apprenticeship Week - a scheme which allows young people to develop their skills and work experience, whilst providing new learning opportunities.

This year's theme is called 'Look Beyond' which explores how vital apprentices are in helping run a business, across a variety of industries. It examines what these schemes can offer to both parties, in terms of career building and socialising in a professional environment.

The Island's companies, apprentices and University College Isle of Man have been speaking to Manx Radio about what pathways are available within their sectors.

What is an apprentice?

The role has different interpretations - many people associate the career with learning a new skill or trade, whilst earning a wage. Various apprenticeships run in connection with local colleges, offering programmes that allow the person to train full time and complete a qualification.

For many apprentices, these schemes give them a chance to develop their own tools at the start of their career - as Director of Utopia Hair Salon, Marco Leonetti explains:

Mr Leanetti started his career as an apprentice and student at UCM. He spoke to Tia Welsh about the impact this has had on his profession:

Apprenticeship programmes are often associated with the construction industry, and deliver a variety of pathways to people. Companies on the Island have been hoping the week is encouraging people to consider apprenticeships as a career.

Many run programmes in connection with the University College Isle of Man each year, but would like to see new faces, as Managing Director of NK Construction, Les Nicol explains:

Some people see the construction sector as limited in what opportunities and skills it provides. But, Mr Nicol also revealed it has much more to offer :

A question many of us would like to ask is - what's it like to be an apprentice? Some people prefer to learn by having a 'hands on approach' rather than learning in an academic environment.

One young IT worker helped answer this, describing how he's gained "a lot more" than if he had completed a undergraduate degree.

Nineteen-year-old  Lance Garganta has been completing his apprenticeship scheme with Manx Telecom, whilst also studying for a Level 4 Programming qualification at the UCM.

He says he's gained so many new skills since starting the programme:

Speaking with Manx Radio, Lance explained more about what his role entails:

The network company is also looking at new directions and how its encouraging older people to take up apprenticeships. It currently offers six positions each year, with many linked to the University Isle of Man College. But, the business is keen to widen its diversity:

Building a strong relationship between an apprentice and the company is vital for a successful apprenticeship.

The University College Isle of Man has also said it's seen an increase in the number of people becoming an apprentice since 2015. Currently offering 19 different apprenticeship programmes, the institution of education wants to expand its options and give people new career paths to try:

To find out more information about National Apprenticeship Week or the programmes on the Island, you can visit the University College Isle of Man's website, or call 648200.