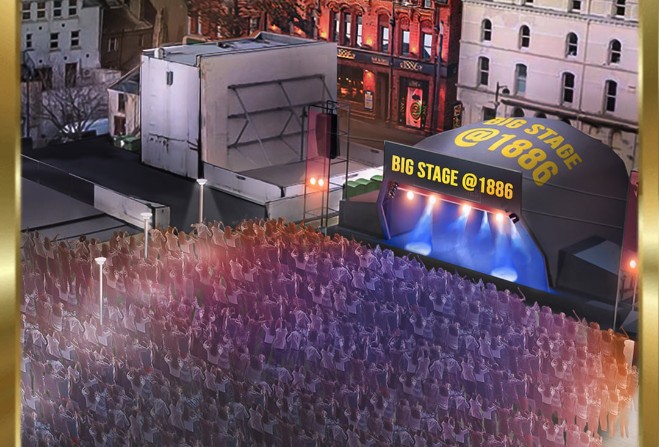 Planning permission has now been granted for a temporary stage in Villiers Square which is set to play host to a number of high profile musicians.

1886 Limited has had its application for the stage, which will be up for a four week period in total, approved.

The decision – from the Department of Environment, Food and Agriculture – comes just weeks before the first acts are due to take to Big Stage @ 1886.

Among those due to perform, on the Fort Street site in Douglas, over the TT fortnight are Jessie J, Primal Scream, Rag ‘N’ Bone Man, Madness and The Darkness.

A temporary stage, and associated structures, can be erected between 22 May and 18 June – but cannot be operational before 28 May or after 12 June.

The director of planning and building control states that the policy framework, set out in the Strategic Plan and Area Plan for the East, is supportive of temporary entertainment uses.

Given the short duration of the proposal the application has been considered to have a ‘neutral impact’ on the conservation area.

Two objections to the proposal were received – one from a resident of Railway Terrace concerned about noise pollution and the blocking of ‘quick access’ to the promenade.

The second was from a business on Duke Street which runs accountancy exams – it highlights that the music could disturb those sitting their tests saying there were concerns the students’ ‘hard work will have been for nothing’.

1886 Limited’s occasional licence, which has been granted, allows it to sell liquor from 10am to midnight daily, between 27 May and 12 June, and have music until 11.45pm.

However the company says it has agreed with the surrounding neighbours to only have live music after 5pm – bar the odd line or sound check in the later afternoon.

You can find the full planning application HERE.