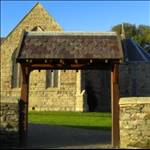 Seven members of the Manx public exercised the ancient right to present petitions for redress of grievance this Tywnald Day.

Formal petitions, some seeking changes in the law, others asking for consideration by a parliamentary committee, were presented at Tynwald Hill after the annual, public promulgation of acts.

Petitioners hope to interest Tynwald members in pursuing issues raised, usually after their own efforts to resolve grievances through statutory channels have failed. That requires a member to 'pick up' a petition after initial referral to the Standing Orders Committee of Tywnald.

David McWilliams from Ballasalla arrived early at the Lych Gate at St John's, the traditional gathering point for petitioners, before the start of the outdoor Tywnald ceremony. He calls for a Tynwald select committee to examine welfare provision for vulnerable people for whom 'life circumstances beyond their control' mean they are reliant on state support.

West Douglas constituent Michael Speers whose petition was presented by MHK Chris Thomas, seeks a review of the health service complaints process, as currently handled by an independent review body.

Campaigners against the closure of pre-schools in the Island Amy Burns and Lisa Morris pursued their crusade with a Tynwald petition, presented on their behalf by Mr Thomas.

The pair seek a commitment from Tynwald to provide 'meaningful' pre school education. Universal state-provision of pre school places ended in July 2012, replaced by a system of vouchers allowing parents to purchase a limited number of sessions for their child in private settings.

The petition also calls for nursery facilities to be incorporated in new schools, to allow for a change of policy at some point in the future.

Ballasalla and District Residents Association chairman Eddie Power presented a petition on behalf of the group, calling for controls to ensure planning conditions issued with approval notices are complied with.

The petition calls for a select committee to draw up 'affordable, accessible and effective means' allowing members of the public a stake in that control - whether over strategic plans or specific developments - past, present or future.

Sarah Lee Watterson challenges Tywnald to overhaul the inspection regime for developers and builders, allowing buyers to gain 'swift and clear' legal redress when they discover defects in properties purchased in good faith.

Ms Watterson's petition presented by Peter Karran MHK, calls for the introduction of a property ombudsman, to consider claims of negligence against workmen, local authorities and estate agents.

Two petitions urge reform of laws relating to the care and upbringing of children when relationships between parents break down.

Philip Walmsley from Colby seeks a presumption in law that both parents have equal rights and responsibilities over their child, where there is no history of abuse, neglect or violence from either adult. Mr Walmsley also calls for compulsory mediation before a case goes to court and equality of legal representation if it does.

In the preamble to his petition, Douglas resident Stephen Holmes argues a highly critical analysis of the workings of the Family Division of the High Court. Mr Holmes alleges justice has failed for many Island children for more than two decades, and calls on Tynwald to appoint a committee to investigate every case involving a child considered by the court since 1992.