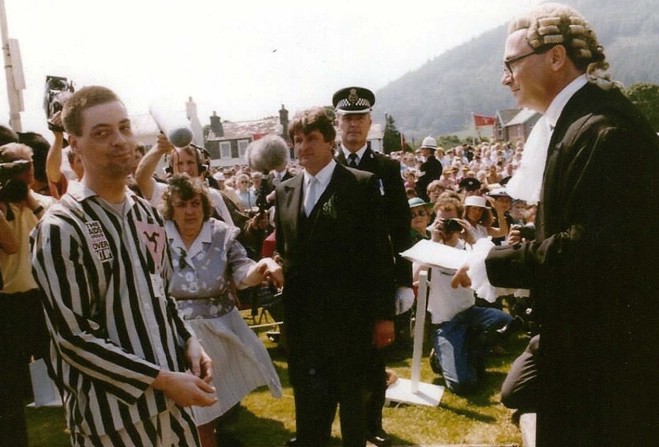 The protest suit worn by a Manx gay rights campaigner will be returned to St Johns today.

Manx National Heritage will be displaying Alan Shea's famous Tynwald Day clothing from thirty years ago as part of its Collecting Pride project.

On 5 July 1991 he presented a petition of grievance to Tynwald at the open air ceremony calling for homosexuality to be decriminalised on Island.

He was joined on the day by members of Outrage – a UK based gay pressure group – to stage his protest.

Dressed in his mock prison uniform, and with his head shaved, he deliberately drew parallels between the treatment of gay people here and Nazi persecution of homosexuals during the Second World War.

He received death threats and was subject to abuse, jeers and heckling on the day – but it was decriminalised a year later.

In 2020 the chief minister issued a public apology to gay men convicted of same-sex offences under previous Manx laws.

To mark 30 years since the protest Alan, and his husband, will be guests of honour at today's Tynwald Day ceremony.

Manx National Heritage will also put his outfit from the day on display, at Culture Vannin, between 12pm and 4pm.

Curator of Art and Social History Katie King said: "Alan Shea's protest suit is one of the most important contemporary items we have in our social history collections.

"It is extraordinary to think how much the Island's attitude has changed. Last month thousands of people joyously attended the Island's first Pride festival but just 30 years ago Alan was subjected to jeering and hissing as he presented his petition.

"His bravery and courage and the momentum built by the Ellan Vannin Gay Group's campaign led not only to a change in the law but a complete change in attitude on the Island."

She spoke to Manx Radio: