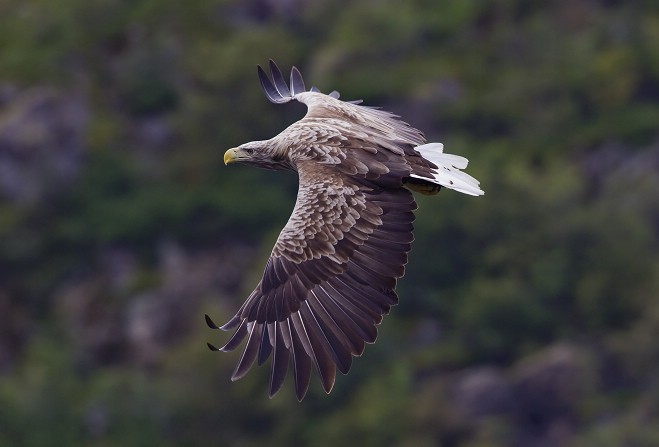 Aonghus has headed north to Scotland.

A rare white-tailed eagle, sometimes known as a 'Sea eagle', took up temporary residence on the Isle of Man earlier this week.

Aonghus, the eagle, was born in the wild in Connemara, County Galway in the Summer of 2018, and is part of the Irish White-Tailed Eagle re-introduction programme.

These birds of prey can fly exceptionally long distances over their lifetime, and even though he's only young Aonghus has already crossed most of the Northern British Isles.

Sightings of him on the island showed he was mostly staying on the ground scavenging on carrion (still-born lambs and sheep carcasses), and so it was believed that he had landed here in order to rest up before flying back to his natal home in Ireland.

However, satellite data brought back yesterday showed that he had taken advantage of the clear skies and headed back north towards the west coast of Scotland, an area which has proven particularly popular with the species.

Manx Birdlife and The Golden Eagle Trust, whilst encouraging people to report any sightings of Aonghus, had warned that they must stay at least 3-400 metres away at all times, especially when he was feeding or resting on stone walls, as it was vitally important that he was able to peacefully go about his business until he was ready and able to fly.

The species was hunted to extinction in the UK by the 1920s, but re-introduction programmes in the '70s brought birds over from Norway in order to get the eagles flying in British skies again.

Re-introduction programmes have proved somewhat controversial with farmers in Scotland, who fear the predators will hunt livestock, particularly lambs, however research conducted in Ireland suggests that whilst they scavenge upon carrion they would rarely actively hunt livestock.