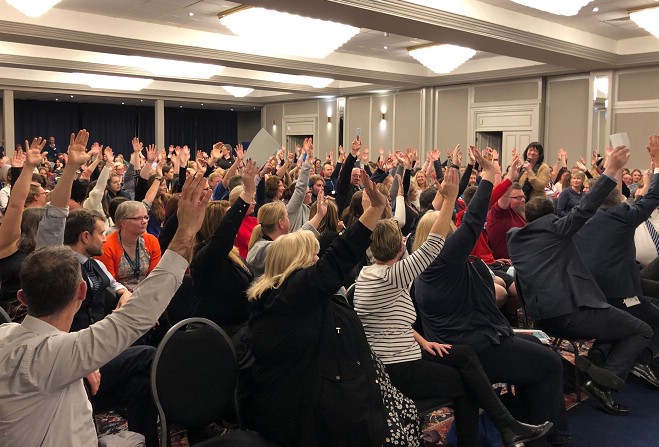 Hundreds of Island teachers gather for update with unions

There's support for further action, including possible strikes, after around two-thirds of the Island's teachers met for an update on pay negotiations.

All four unions discussed the next step in a meeting at the Comis Hotel on Tuesday evening.

There were overwhelming indicative votes in favour of additional measures being taken should no settlement be reached, including strike action.

She says the turnout showed the solidarity and frustration among teachers on the Island:

Manx Radio contacted the Isle of Man Government for comment.

It issued a statement on Wednesday afternoon, which says:

"The Isle of Man Government values and respects the professionalism, dedication and commitment of all the teachers on the Island.

"The Isle of Man teacher pay awards have been linked, in agreement with all teaching unions, to those in England and Wales for many years.

"As a result, the Department for Education, Sport and Culture increased pay awards for main scale teachers by 3.5 per cent in the last financial year, with middle leaders receiving 2 per cent and school leaders 1.5 per cent.

"While this arrangement is currently being disputed by two unions, who want 3.5 per cent to be made to all staff, offers made by DESC of both independent arbitration or a court of inquiry have been rejected.

"All parties agreed that the unions should bring forward an offer prior to the meeting scheduled for 22 November.

"This meeting was postponed due to a misunderstanding by the unions.

"DESC has held four days of talks with the Unions and is currently awaiting details of their pay proposal for next year, before the next meeting scheduled for 3 December.

"DESC is keen to work with all parties to resolve the issues that have been raised and will be inviting the Manx Industrial Relations Service to attend these meetings."