'We warned them of another flood, but they didn't listen' 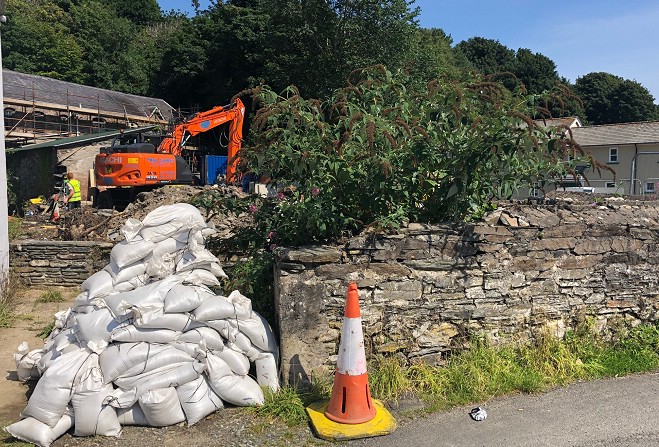 Sandbags have been restocked for residents on Glen Road

Residents in Laxey say the infrastructure minister ignored their warning that current flood improvement works on Glen Road, were not cut out to cope with heavy rainfall.

This month, the area was struck by a torrential downpour that meant some homes had to be protected with sandbags.

The flash flood also washed away a DoI pipeline at a culvert, much to the despair of Garff Flood Action Association, which had predicted this would happen.

Andrew Smith is a member of the group and a resident on Glen Road:

Since work got underway on what is locally known as 'Quarry Falls', a tributary that runs behind Laxey Football Club and under the road into the main river, some residents took issue with the size of a pipe used by the department.

'In the event of even a modest thunderstorm' the letter said, 'the single pipe presently being installed to divert the water flow while the new culvert is being constructed, would prove insufficient', adding 'the potential for flooding of nearby properties is clear, and you will, I'm sure, understand our concern'.

Torrential rain concentrated in the Laxey Valley that night led to a localised flash flood and washed away the pipe which was unable to handle the flow of water.

A weather station in the area recorded over 40mm of rainfall between approximately 11pm and 1am.

Due to the level of surface water coming down Captain's Hill, the fire service was called to a property further up Glen Road, which had to be pumped.

Prior to the downpour, it's understood the department used the all the village sandbags to protect its culvert site, leaving none for residences on Glen Road.

Mr Smith said he contacted the Civil Defence at 8pm on Wednesday night asking for them to be replaced, In light of the yellow weather warning.

Following a delivery a few hours later, he said he then helped put sandbags at his neighbours' properties which were being affected by surface water.

In the aftermath the following day, another letter with Chief Minister Howard Quayle copied in to Mr Baker by the flood group's Ken Crellin, a resident on Glen Road, said events unfolded 'exactly as we predicted'.

'Our exact fears came true at about 0200 last night, when the culvert overflowed through the small access hole made in its roof, showing that it was indeed full to capacity.'

'The tiny 0.5 metre pipes of course, swept away, and presumably lost...One wonders if a suitable risk assessment was carried out'.

'In no circumstances' he added, 'should the capacity of the new culvert be less than the existing one.'

Mr Crellin said the views of the local residents 'be sought and respected... as a matter of urgency.'

The Department of Infrastructure has been contacted for comment.