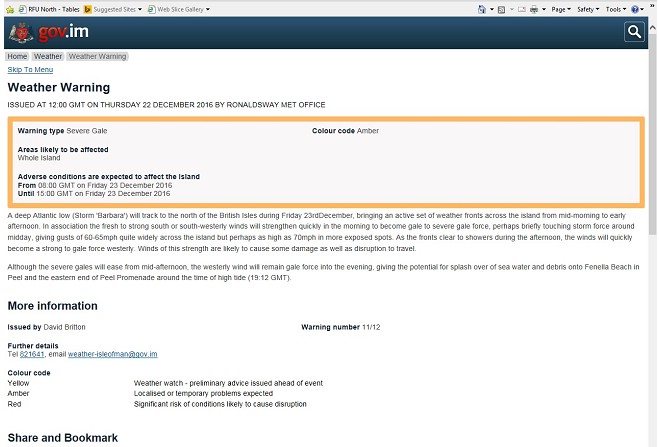 The weather warning for tomorrow has been upgraded to Amber.

An early yellow warning was issued on Tuesday.

The period of the alert has been extended to 8am to 3pm which could lead to a difficult commute to work or to the shops.

There's a possibility of storm force winds briefly around midday with gusts of 60 to 65mph quite widely across the Island but perhaps as high as 70mph in more exposed spots.

There will also be a period of heavy rain.

The Met Office says winds of this strength are likely to cause some damage as well as disruption to travel.

Although the severe gales will ease from mid-afternoon, the westerly wind will remain gale force into the evening, giving the potential for splash over of sea water and debris onto Fenella Beach in Peel and the eastern end of Peel Promenade around the time of high tide (19:12 GMT).