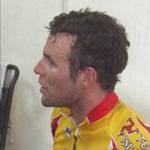 The Manx Missile has secured his 50th career victory – in less than three years!

Mark Cavendish reached the milestone with his 21st victory of the season in stage two of the Tour of Ireland on Saturday.

It was his fourth stage career victory in the Tour and brings the tally of 2009 wins for the Columbia-HTC men's team to 68.

‘It's always good to win,’ Cavendish said afterwards, ‘and though it was a tough finish we managed to take control of things with two kilometres to go.

‘It was a team win. One guy crosses the line with his arms in the air but it's a success for everybody.

‘I'm not going to be going for the overall here but for sure it's an objective for the team. We won it last year with an amazing ride on the last day and I think we can do it again.’

After Ireland, Cavendish's next race will be the Tour of Missouri in the USA.