Another Silver for Kennaugh 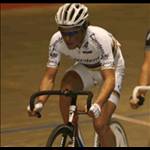 At only his second World Cup meeting, Manx cyclist Peter Kennaugh has won another silver medal.

He followed up his silver in the Points Race in Colombia before Christmas with second place in the Madison at the Beijing Velodrome last night.

He teamed up with Rob Hayles as the pair continue their build-up to the World Track Championships.