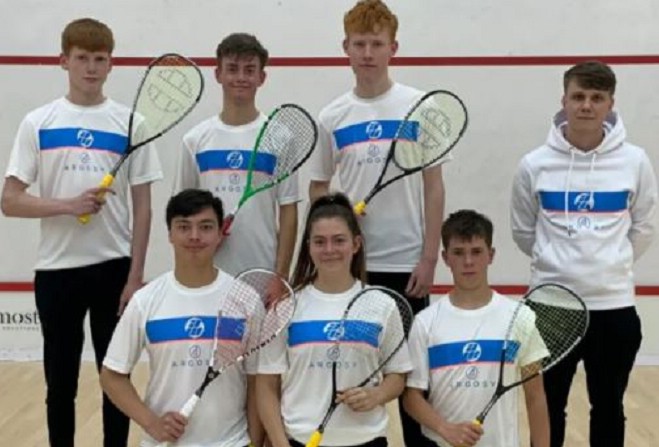 Argosy Allstars kept their A league title hopes alive by dropping just one point in their win over Stone Art Squash team.

The last match on court was Stone Art captain Steve Baker, who lost by a margin of only 3 points in his 3-2 defeat at the hands of Rob Boyles.

Team AON put one hand on the A league trophy with a convincing 5-0 win over Crazy Phil Shaw Vehicles. They're now looking like favourites for the Title of undisputed A league champions for the 2020-21 season.

Sadly, due to some Crazy players preparing for the Mountain Marathon, the team could only field 3 players. AON’s Jason Crease, Mason McLarney and Chris Cave all achieved 3-0 win and with the two walkover matches the final result was 180-55 to the league leaders.

Crowe Dragons struggled after the B League’s restart continued on Tuesday against the Racketeers Pioneers.

The injury-ravaged Dragons could only field three players for the encounter, handing two walkovers and 90 points to their opponents before a ball was struck in anger. In the three games that did take place, the Dragons gave a good account of themselves. Beleaguered Dragons’ skipper Darren Smethurst beat James Leith 3-0, while the Racketeers’ Daf Lewis edged a topsy-turvy encounter with James Martin 3-2 in what was probably the tie of the night. Baillie Watterson wrapped up the match’s other spoils beating Dave Hedley 15/11, 15/11, 15/11 at number two.

It could not have been a closer match when the Sharks met Autumn league winners the Outcasts, with the final result being 3-2 to Sharks. There were wins from David Freer, Alan Macnair and Greg Ansara for Sharks, whilst Outcasts took the spoils at first and second string where  Chris Cave and Liam Davis got the better of Douglas Jacobsson and Dave O’Neill respectively.

Argosy Junior Academy celebrated the end of the exam season with their first win of the Winter league by beating Island Tyres and Exhausts 3-2. The juniors won the middle order matches through Isaac Quayle, Ben Leith and Emma Leith, but Ben was pushed all the way by Peter Sharples who came back from 2-0 down to level the score at 2-2 before Ben took the fifth game convincingly.

Island Exhausts wins came at the top and bottom of the playing order with Phil Butler winning 3-0 and number one player Shaun Wyllie triumphing 3-1. These teams were well matched with a points score of 200-197 to the Juniors before the bonus points were added.

In the C League, Island Exhaust Vets were pushed all the way to their 4-1 win in a hard fought fixture with Buchanan and Pitts Misfits. Vets Mark Stratford and Les Callow secured good 3-0 wins at first and fourth string respectively while at number five teammate Brian Cowley needed all his experience to get the better of Allan Walkingshaw 3-1. Terry Holt took the only win for Misfits at third string beating Gerrit du Toit 3-1.

The match of the night was between Ian Sheard, returning from injury, against a determined Andy Dixon. This encounter went all the way to five games with Sheard eventually securing the win and the match for the Vets.

Despite being down to only three players Outcasts Dragons managed a 3-2 victory over Hansard Racketeers. Dragons captain Darren Smethurst enjoyed a really close encounter with Matt Corlett with both players getting double points in each game. Stuart Highy and Andy McLarney were the other two winners for the Dragons. Despite losing the match the Racketeers won on points 207-160 thanks to the Dragons conceding the two lower order matches  45-0 to Racketeers.

Santander Racketeers Academy had a good 4-0 win over Chrystals Junior Academy with both teams only having four players available on the night. Harry Douthwaite won 3-0 against an improving and determined Callum Larkin at third string but the other matches all went to four games. Harrison Callow played some excellent shots to take a game off Santander captain Steven Wright while Amaline Batty did very well to take a game from Andy Brown whose speed gave him the advantage needed to win. Likewise in the number one seed match Leighton Ginty took a close win in the first game against Fraser Dorling but he latter’s ability to move well around the court sealed him the next 3 games to win.