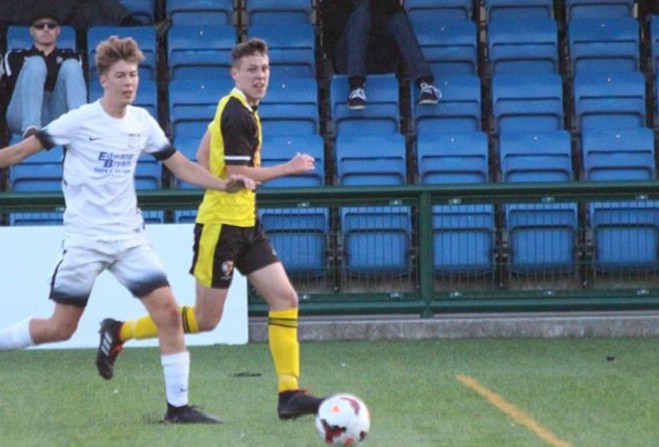 The new generation of St Georges stars are relishing the chance to follow in the footsteps of one of the greatest sides in Manx football history, according to one of the club's brightest prospects.

Joel Ibanez has made a seamless transition into the first team set-up at Glencrutchery Road with the club still in contention for a ninth consecutive top flight title.

Despite a summer of upheaval for the reigning champions - where a number of high-profile players departed and manager, Chris Bass, Sr, made a swift return to the dug-out after announcing his retirement - they are firmly in the title fight and have also secured a place in this season's Railway Cup final.

Many were quick to write Geordies off, but Ibanez believes the dressing room is as hungry as ever to succeed.

"Obviously we've had a few departures from the club and not many people coming in to take their places, but I think we have proved a lot of people wrong with some of the results we've got" the teenager said.

The dominant force in Manx football for more than a decade; 13 top tier titles, six FA cups, nine Hospital Cups and eight Railway Cups have been added to the St Georges trophy cabinet since the 2003/04 season.

Many of those triumphs involved the colossal presence of captain Frank Jones, who signed for St Marys to 'test himself again' in the summer.

Another influential player in the Geordies ranks followed him to The Bowl in the form of Jack McVey, while Andy Perry and Julian Ringham also departed.

Eighteen-year-old Ibanez believes the younger players coming through are desperate to prove they can cut it at elite level.

"Beating Marys in the Railway Cup was a good result for us and then we got a couple of draws against Corinthians and Marys as well in the league so I don't think we're doing too bad.

"You've got the likes of Sean Quaye and Johnny Myers who have been at the club for ages. They have been really good in training in making sure all the players work hard, and in matches keeping us going and fighting back" added Ibanez.

Other young players whose stock continues to rise in the Geordies first team include defender and Isle of Man under-18s captain Lewis Bridson and Jay Skelcher-Maxwell who has pace to burn in midfield.

Joey Morling also put in a man of the match performance by bagging a brace as the side eased past St Marys 4-0 in the Railway Cup.

All four played in that last-four tie, as Ibanez got on the scoresheet with a sensational long-distance effort.

"The ball just sat nicely for me in midfield and I just sort of put my foot through it.

With the pundits throwing their weight behind other clubs to end St Georges' title-winning dominance this season, the pressure is somewhat off.

But Ibanez believes the dressing room at Glencrutchery Road is desperate to continue winning silverware this season.

"Realistically, just to win a couple of cups and challenge for the league is what we're aiming for here. To do that would be great."