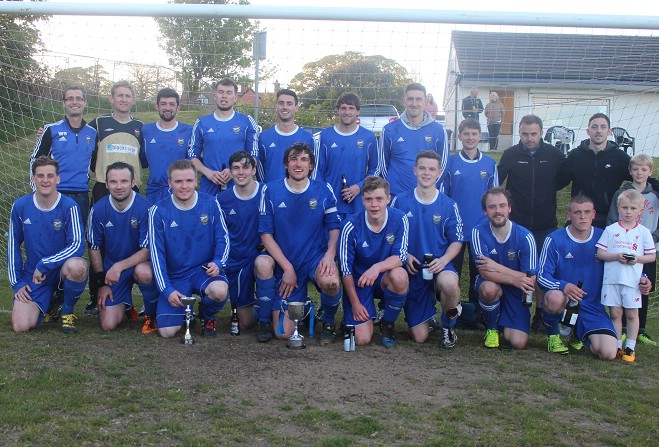 Six of the best from new champs

Braddan’s memorable season got even better on Wednesday evening with a display of champions.

The club was crowned JCK Division Two champions with a 6-3 home success over Gymns.

After a tentative start from the Victoria Road side, Jamie Delaney eased their nerves on 10 minutes, heading home his first goal of the season.

Gymns could have equalised a minute later when Jordan Cooper’s effort struck the crossbar.

However, Braddan started to assert their authority, doubling their lead on 35 minutes following a foul in the opposing box. Conor Dempsey made no mistake from the penalty spot.

Braddan continued to press and grabbed a third when jet-heeled winger Michael raced clear and placed his shot into the bottom corner.

Hutton struck again quickly, and although Gymns pulled one back on 41 minutes through Tom Callow, Stuart Pacey found the net for Braddan’s fifth in added time in the first half.

The seal on a super evening for the hosts was complete early in the second half when Braddan captain Joseph Carter flicked home the sixth with a header.

Gymns reduced the arrears on the hour when Sean Shimmin drove home an angled shot and added a further consolation in stoppage time through Richard Winn.

IOMFA treasurer Stephen Carter gave a short speech congratulating Braddan on their success before presenting medals to the players and handing over the championship trophy.

Having already secured the GH Corlett Woods Cup (and Combination Two title), Braddan will be looking to complete a division two treble in the Paul Henry Gold Cup final at the Bowl on Sunday where they will take on Onchan.