Bullock Back in Racing 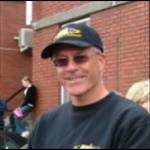 In an exclusive interview for Manx Radio Sport, he has confirmed he is setting up Martin Bullock Manxsport.

He disbanded his very successful Martin Bullock Raceteam at the end of last year's Manx Grand Prix when Carolynn Sells became the first woman to win a race around the Mountain Course.

M.B.M will enter riders into the Isle of Man Championship at Jurby and the Manx Grand Prix.

Martin says the new set-up allows him to get involved in other areas as well as motorcycling:-