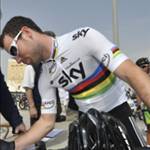 Mark Cavendish was unable to get the better of his rivals in the sprint finish at the end of today's fifth stage of the Tour de France.

Today saw the riders cover the 197km route from Rouen to Saint Quentin.

Tomorrow is the final flat stage for a week or so, and is again set up for a bunch sprint finish.