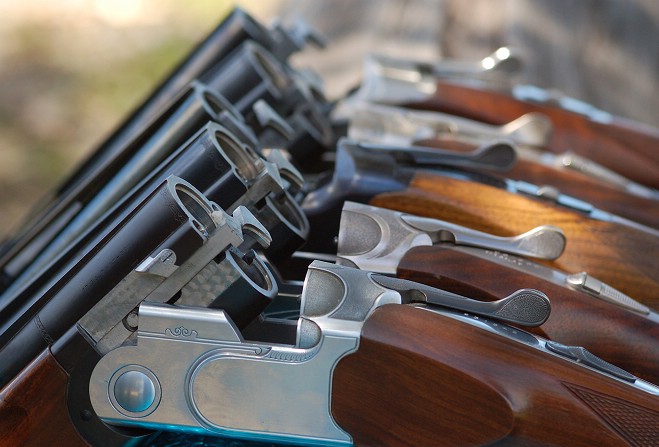 The IOM Clay Pigeon shooting club held there annual Christmas shoot, kindly sponsored once again by Top Spec Fencing, and saw a record entry of 61 shooters taking to the stands in cool, windy but dry conditions.

The leader at the half way stage with a perfect 25 straight was B class shooter Rob Corlett, with A class Mike Walker in second place on 24 followed by Mark Riley, John Moore and another B class shooter in Peter Lowe all on 22.

In the Phil Yewdall section of the shoot for those people who have never shot before, J Salter was the leader here with a well shot 22, in second place on 16 was R Wade with C Kermode third on 15, the leading lady was Julie Faragher on 13. At the end of the second round in the non members section, J Lewis was third on 102 points with Rob Watterson in second place on 114 but the winner on 117 was G Lewis.

In the unclassified section, Ted Davis was in third place on 108 with Stan Skinner taking second place on 117 with James Bradley in first place on count back also on 117.

In the ladies section, Allana wade was second on 69 with Nicky Barnett taking first place on 81.

In the novice section for new members, Warren Flynn was third on 75 with his dad Steve Flynn in second place on 81 but in first place also on 81 and beating Steve on count back was junior Zac Bellhouse also with 81 points.

In the junior section, Michael Cross was in third place on 108 with Arran Wade taking second place on 114 but losing out for first place on count back to Joe Faragher also on 114.

In C class, Richie Radcliffe was in sixth place on 72 with Alan Wright taking fifth place on 75, Tom Kelly was forth on 87 with Brian Kelly taking third place on 90, Steve Rand was in second place on 99 but the winner of C class with 114 was Will Rand.

In B class junior, Michael Cross was in sixth place on 108 with another junior Joe Faragher in fifth place on 114, Stan Cross was forth on 117 with Mark Barnett taking third place on 120, Peter Lowe was second on 129 with Rob Corlett taking B class with 138.

In the handicap section for the George Costain memorial cup the winner was former sidecar racer Brian Kelly on 174 points.

This only left the John Moore highgun cup to be decided and we had to have a shoot off to decide a winner between A class Mike Walker and B class Rob Corlett who both tied on 138 shot over a full round of 25 targets. It was neck and neck after ten targets with both shooters only dropping one target, it was still neck and neck after twenty targets with both shooters dropping a further target each. They both hit there twenty first targets then Rob missed his next two only for Mike to miss his twenty forth target, Rob hit his last target which meant Mike had to hit his to take the cup which he did scoring 22 to Robs 21.

Next week is third round of the winter series Pro Sporting league, entries close at 10am.