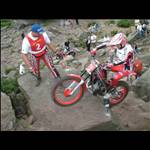 Manx ace Steve Colley finished fifth in the penultimate round of the British Trials Championship at Hook Wood in Surrey.

He dropped 45 marks compared to the event winner Sean Morris on a score of just 10.

In the overall standings, Colley has moved up a place to 7th, having not scored on two of the rounds earlier in the season when ruled out by injury.

At the top, Morris has closed to within just two points of series leader Graham Jarvis.