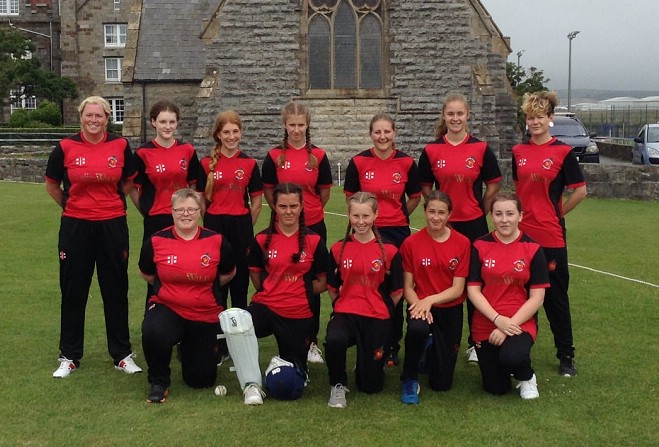 Sunday, 4 July saw another round of Super 2s fixtures.

The first series of T20s included the U17s and National Team squads and the women's National Taem playing their first fixture together as a side versus a Junior Manannans side of U15 and U13 squad members.

The Junior Manannans batted first and scored 152-2. This included a maiden 50 for David Sargent and 42 not out for Sam Burrows. Wickets were taken by Matilde Jackson and Jo Hicks. In response, runs were scored by Bliss Murtagh (22), Caitlin Henery (22) and Lucy Barnett (19).

After a positive start the Junior Manannans bowled some tight lines and restricted the National Team to 102-8. Zak Kaniewski, Theo Helfrich and Joe Barker each picked up two wickets and Elliott Butler and Joe Page one a piece. There were lots of positives to be taken from the women's National Teams first outing as a side.

On the main square, a mixed U17 and National Team squad saw Chris Langford's Team A bowled out for 86 with some very tight and attritional bowling. With Matt Ansell, Jacob Butler, Jenson Eve and Matty Young each taking two wickets. In response Matt Ansell's Team B calmly knocked off the score for the loss of one wicket with Adam McAuley 47 not out and Luke Ward 31 not out putting on 84 for the second wicket with runs scored all round the ground.

The second round of fixtures saw the U13 squad play and U15 and U17s. On junior square after an early wicket U13 Team B battled to 105-9 with contributions from Thomas Ackron, Joel Williams, Will Wiseman and Oli Poole-Wilson. The run rate had started to climb but an excellent catch by Ryder Spencer on the boundary removing Oli for 20 slowed the rate back down. There was some excellent bowling with Ryder Spencer and Hugh Tummon bowling quickly down the slope and wickets taken by Kyle Gunnion, Samson Curtis, Ryder Spencer and Joe Page. In response, a second wicket partnership of 81 between Cameron Roome 35 not out and an impressive 64 not out by Ben Leinwand with some fine shots down the ground knocked the score off in 10 overs.

On the main square an U15/U17 Team A batted first and were restricted to 119-8 with an outstanding spell of spin bowling from Nathan Williams taking 6-12. Joe Humphrey top scoring with 29 and Carl Hartmann 27. In response, Team B had a steady start with Tom Ward scoring 22 but impetus came from Fraser Clarke 39 not out from 26 balls to win the game in 18 overs. Ned Crellin and Sam Perry each picking up a wicket with Theo Helfrich taking two.