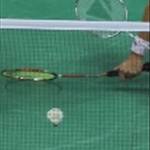 Island badminton player Cristen Callow produced a battling performance before being knocked out of the quarter-finals of the English National Badminton Championships.

She teamed up with Alex Marritt of England and reached the last eight before being defeated 21-10, 21-14 by number four seeds Ben Stawski and Lauren Smith.