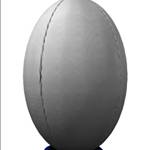 The Ulster Grand Prix was abandoned on Saturday due to standing water around the Dundrod circuit – but not until after Ramsey man Connor Cummins recorded two second place finishes.

Cummins continued his impressive season with two podium places in the Supersport and Superstock races, being pipped by Guy Martin and Ryan Farquhar respectively.

Another local, John Crellin, gained a 26th spot in the Superstock.

Cummins also finished a creditable sixth in the Superbike race in which another TT star Ian Hutchinson claimed the honours.

He was pleased with his efforts(audio file attached):