Cummins roars into the top six at Knockhill 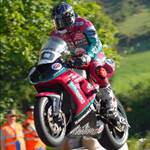 With two races at the Scottish venue there were plenty of points on offer for the Ramsey rider and his Team Blackhorse Yamaha squad and they took full advantage, scoring a brace of sixth places for 20 well-earned Championship points.

That haul has also seen Conor jump up the standings to ninth place overall.

Speaking afterwards he said: "It's been a good weekend for me and the team and everything came together over the course of the three days.

"All the time and effort we put in at Donington is certainly paying dividends and we've made massive progress with the handling of the bike this weekend, which has allowed me to push that little bit harder.

"The team have been working so hard to give me what I need and I've got a good feel for what the bike's doing now so we're at a place where I think we can start pushing for podiums."

Prior to the next round at Brands Hatch, Conor will be back on Manx roads next week, linking up once more with McAdoo Kawasaki for the Southern 100.