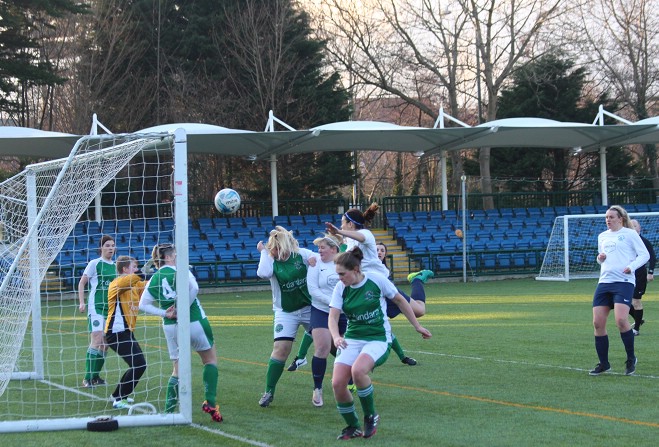 The two dominant clubs in women’s football will meet in the final of the Floodlit Cup.

That’s after two one-sided semi-finals at the Bowl yesterday (Sunday).

First-time semi-finalists Laxey only started with 10 players and battled hard.

Rebecca Cole opened the scoring for Royal only for Alex Honour to equalise straight away on the quarter-hour mark.

A Donna Shimmin penalty on the half hour restored the Royal lead and it remained that way until the break.

Soon afterwards, Kym Hicklin made it three, Alannah Hall wrapped it up before Leanne Quayle completed the scoring five minutes from the end.

The other match was expected to be the close one but, ultimately, that ended up one-sided as well.

Jade Burden’s early goal was all that separated the sides in the first half but two goals in the first 12 minutes of the second half booked their place in the final.

Chloe Teare and Burden again made it 3-0 before Jade completed her hat-trick and Lauren Christian extended the lead to 5-0.

Player of the year Sarah O’Reilly hit a consolation against her former club but that was all Peel had to show for their efforts and a fine display by Corinthians goalkeeper Sian Smith.

The Whites could even afford to miss a late penalty.

This will be the seventh time the two sides have contested the final of this competition.