Double success for Lucy and Bruce 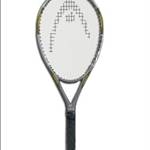 Bruce Wagstaff and Lucy Hamilton-Turner each enjoyed double success as the Chrystal Open tennis championship drew to a close.

Wagstaff and Riaan Riekert provided a hard fought contest for the men’s title with all-court rallies.

Bruce took the first set, fairly comfortably 6/2, but Riaan made a much bigger impact in the second set before Bruce edged it 7/5.

Meanwhile, Karen Faragher and Lucy Hamilton-Turner were also giving a good performance - Lucy just took the first set 6/4 and then the second 6/1.

Lucy and Karen then paired up to tackle the much younger partnership of Laura Feely/Hannah Snidal in the women’s doubles final.

Bruce then teamed up with James Buxton to take the men’s doubles title – but only after three long, exciting and sometimes frenetic sets.

They started well against Riaan and Jamie Teare taking the first set 6/3 before the number two seeds turned on the power to win 6/3 only for Bruce and James to manage a 6/3 third set win.

The next major event at the club is the Wessex Junior Open from July 1-5.

You can find more details on the club website: albanyltc.co.uk