On Air Night Flight | Midnight - 5:00am
Chicago - What Kind Of Man Would I Be? Download 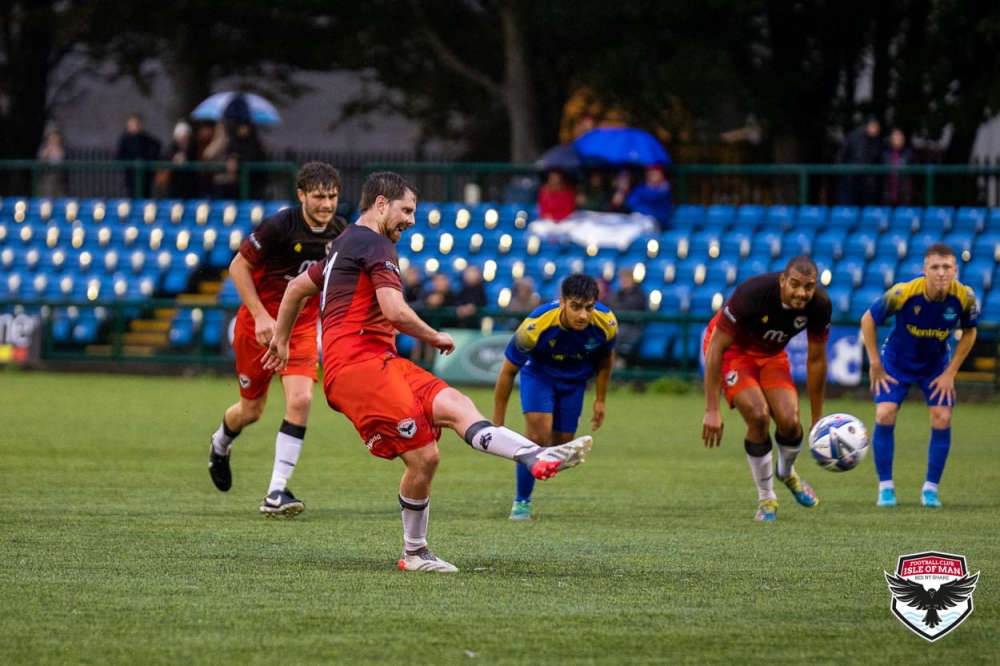 Jack McVey’s dramatic late penalty earned FC Isle of Man a point as they played out a thrilling 3-3 draw with Barnoldswick Town at The Bowl this evening (3 September).

The Ravens were back on Manx soil in the NWCFL Premier Division clash hoping to avenge back-to-back defeats in their last two games.

The Island side started brightly and took the lead after just five minutes when Lee Gale broke free down the right before fizzing a low pass into Ste Whitley who slotted a low finish past Barnoldswick Town goalkeeper, Jordan Gidley from six yards.

After that followed an evenly-matched contest with both sides creating chances and Barnoldswick Town got an equaliser 22 minutes in when the visitors’ star man - and eventual man of the match - Kuda Chingwaro shrugged off defender Jacob Crook on the edge of the FC IoM penalty area before slotting a composed finish past Ravens ‘keeper, Dean Kearns, into the bottom right corner.

The away side then nearly took the lead six minutes later, but Barnoldswick striker Gareth Hill saw an effort from 12 yards smash against the crossbar.

FC IoM then retook the lead in the 33rd minute when Whitley delivered a free-kick from the left from 40 yards to the back post where Gale - who assisted the Ravens first goal - guided a cushioned header into Gidley’s bottom right corner to make it 2-1.

Following half-time, Barnoldswick Town once again responded well to being behind and ramped up the pressure on the FC IoM defence but spurned several good opportunities, including midfielder James Ormrod seeing his strike from 12 yards or so cannon off Kearn’s right post.

But the visitors then got a deserved equaliser with 82 minutes gone when Mitchell George’s cross from the left was met by Gareth Hill six yards out who got between the Ravens ‘keeper and defenders to poke into the net from close range.

Then just three minutes after that, Barnoldswick then took the lead for the first time in the match, when the excellent Chingwaro scored his second when he rocketed a left-footed strike from 20 yards into the top corner to make it 3-2.

FC Isle of Man, now trailing, went in search of a late leveller and it came in dramatic circumstances in the 90th minute when Barnoldswick’s Ormrod was adjudged to have brought down Ravens substitute Furo Davies in the penalty area.

Up stepped Jack McVey who made no mistake from the penalty spot, curling a wicked hit into Gidley’s top left corner to make it 3-3.

The Ravens next game will be at home against Burscough next Saturday (10 September), kicking-off at 6pm.