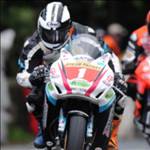 Michael Dunlop has told Manx Radio that he will make his sidecar debut at this weekend's Gold Cup meeting at Scarborough.

The machine is being loaned to the T.T. star by Nick Crowe and his partner will be the most succesful passenger around the Mountain Course - Dan Sayle.

There have been constant rumours concerning Michael Dunlop taking up the challenge of three-wheel racing after he tested an outfit at Jurby last November.

Meanwhile, Tim Reeves has announced he has parted company with Nick Crowe Racing.

The World Champion rode for the team at the T.T. and Southern 100.

He says he was hoping to contest the Gold Cup at Oliver's Mount this weekend and was disappointed to find out the news of Dunlop competing with his passenger Dan Sayle via social media.