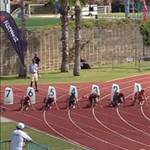 Team Isle of Man has secured eight more medals on day two of action at the NatWest Island Games in Bermuda.

Two came on the track, three in the pool, there were two for the mountain bike team and there was also success in badminton.

Island athlete Kevin Loundes sealed gold in the 10,000 metres to go one better than the silver he gained in the Isle of Wight two years ago (audio file attached).

New benchmarks were set in the swimming.

Laura Kinley claimed silver in the 50 metres breaststroke, that was matched by Charlotte Atkinson in the 100 metres butterfly.

Earlier in the day, Guy Davies set a new Island record in his 100 metres backstroke heat.

And the men's swimming team set a new Manx mark in their 200 metres medley heat.

Elliot Baxter took silver and Leon Mazzone bronze in the mountain bike criterium, while there was also a silver medal for the badminton team as they defeated Bermuda in the semi-final before narrowly losing to Guernsey in the final of the team competiton.

Today the men’s and women’s gymnastics team will be hoping to add to their tally, there’s also the cycling time trial; tennis and badminton continues as does sailing, and there’s a full schedule of swimming and athletics, including the men's 800m final which Ryan Fairclough will contest.