On Air Night Flight | Midnight - 5:00am
Osmonds - Let Me In Download

FC IoM back in league action at Charnock Richard 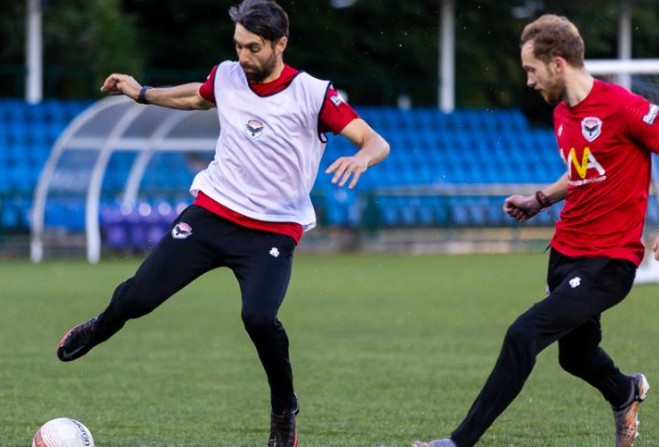 Ravens hoping to follow up on cup win last week

FC Isle of Man will return to league action this weekend when they travel to face Charnock Richard in the NWCFL Premier Division tomorrow (1 October).

This weekend, the Ravens will be hoping to replicate the same quality they produced in the second qualifying round of the FA Vase at The Bowl last time out (24 September).

A Chris Bass jnr. double and a close-range finish from Sam Caine saw the Manx side earn a 3-1 win against Lower Breck.

In the league, it's been a tough recent run for the Island outfit who have only one win from their last seven league outings.

That came back on the 23 August in a 1-0 win away against Padiham.

FC IoM currently sit 17th out of 22 sides in the table after 11 games with ten points on the board so far.

Their opponents this weekend, Charnock Richard, are also hoping to find more league consistency after a chequered start to their campaign.

The Lancashire side are also on ten points for the season so far but sit in 15th in the table due to a better goal difference - they've also played one fewer game than FC IoM as it stands.

Charnock Richard's last league win came back on the 16 August in a narrow 3-2 victory over bottom-of-the-table side Ashton Athletic.

However, since then, they've earned an impressive 3-3 draw against second-placed AFC Liverpool on 13 September, and four days later only narrowly lost 2-1 to high-flying Avro.

Sean Quaye, Jamie Corlett and Jack McVey are unavailable as is Lee Gale who picked up an injury during last weekend's FA Vase victory.

In the backline, however, Chris Bass snr. has all-round defensive option Ash Higginbotham to call on, meanwhile there's an important return in midfielder as Jack Camarda comes back into the squad after being unavailable last week - meanwhile, last week's man of the match, young Tiernan Garvey, who's impressed many in recent weeks is also available once again.

Matthew Quirk keeps his place in goal after making his first appearance of the season last week.

Up front, alongside the key presences of Ste Whitley, Luke Murray, Adam Mealin and Ciaran McNulty are Luca Moretta and Tom Creer, with the latter in contention to make his first Ravens' appearance.